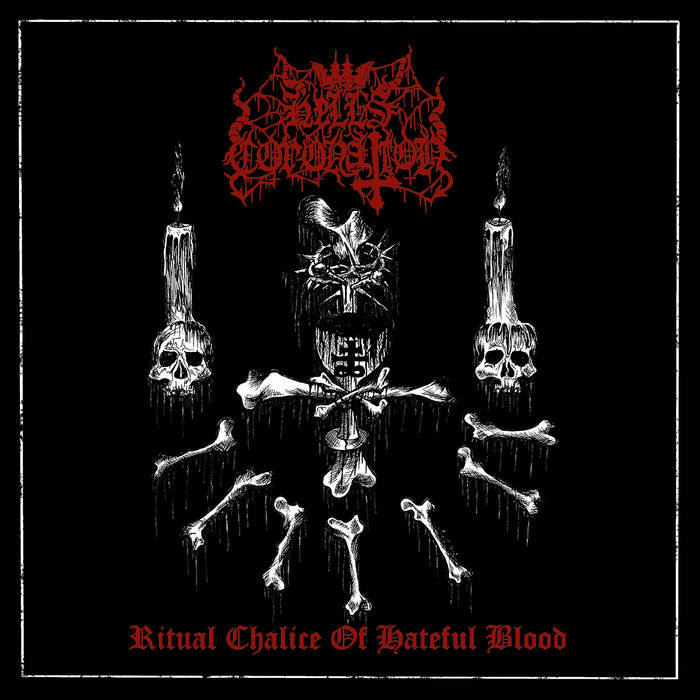 Gdansk, Poland… the home to Pomeranian scourge Hell’s Coronation. In 2019 Godz of War Productions released the duos debut full length album release, entitled ‘Ritual Chalice of Hateful Blood’. (Black Death Productions later put out the LP version) Featuring six tracks of haunting and hellish Doom laden Black Metal, this ode to Satanism, darkness and The Occult has a metronomic, almost hypnotic harmony. Never seeming to rise itself out of some kind of primeval lethargy, ‘Ritual Chalice of Hateful Blood’ despite its pedestrian pace is gripping, absorbing and engaging from start to finish. Following the daunting ambient tones of intro track ‘Levitating in Tarry Fog’, Coffincrusher (Who left the band in 2021) and Zepar then embark on a wearisome and lengthy journey through broad pastures of ungodly darkness, and as they range forward they spew forth bile and hatred towards weak religious fools whilst glorying in the majesty of Satan.

I love the steady rhythm that Hell’s Coronation bask in. Their drumming style is simple, yet so damned effective, whilst the basslines are strong, powerful and groove laden. Original band member Zepar contributes scorching, hateful vocal barbs, as well as bleak, yet crushing guitar tones and in places very subtle use of keyboards.

Since this album release the band have gone on to release three split offerings (With fellow Polish Black/Death Metal duo Cult ov Black Blood, Italian Black Metal duo Hepatomancy, and Polish/US Black Metal collaboration Dead Dog’s Howl) as well as a couple of EP releases. then in 2021 Zepar took on the added responsibility of bass duties whilst bringing in Skogen on drums.

‘Ritual Chalice of Hateful Blood’ is my first taste of Hell’s Coronation, and their powerful brand of Black/Doom Metal has me eager to check out the rest of their discography. (Marksson)