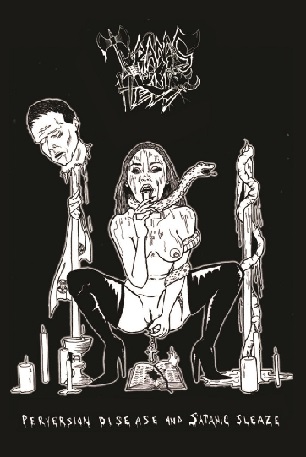 “Perversion, Disease and Satanic Sleaze”, isn’t that a good slogan to sell your depravity? Tyrants of Hell thought so to market their thrashin’, punkin’ and grindin’ Death Metal towards the ignorant young lambs of society.

You will hear nothing in the modern style as the 1980s extreme metal scene and especially Autopsy, Macabre, the Canadian Slaughter and Repulsion rule the world according to these perverts. The decision to cover Bathory’s “Reaper” is understandable as well concerning the roughness presented on Bathory’s first album. It is without any doubt Tyrants of Hell aren’t camouflaging their influences for one bit, but we don’t mind…do we?

Raw like a blunt bone-saw while cutting up a body for a satanic ritual during a bring-your-own-entrails-fest called “Did you SAW that?”. Once again, you’ve heard it all before…but shall we dance? (Ricardo)