Bestial Mockery – Gospel of the Insane 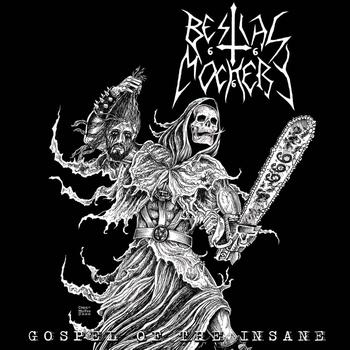 “Ein, Zwei, Drei, Vier!” and they’re off. Bestial Mockery with their new album; “Gospel of the Insane”. And insane it is. After the intro “Tyrants of Hells Land”, in which guitars and vocals can already be heard, they’re starting with “Hells Vociferation”. This track seems highly influenced by Thrash Metal, when it comes to the guitars and composition in general. It reminds me to Zarathustra, and especially to the vocalist Hurricane. With a solo every now and then, it starts terrific with this Swedish piece of terror. It’s clear when you listen to this album: this by punk influenced chaotic music isn’t performed by people who just started. They exist since 1995 and released a bunch of good releases.

“Did you say Punk”? Yes, I did. Since Punk is a music genre which only exists out of “improvisation” and “chaos”, that’s a term that fits Bestial Mockery like no other. Though; their not as uninspired as most Punk-bands. They have some serious good music to offer. With samples as a “fuck you” choking guy, a chainsaw (I’m wondering where that fascination for chainsaws come from, since the name of front man “Master Motorsåg” is translated “Master Chainsaw”) and suffering people. Great.

What I did expect of this album, is what they delivered. Just Black Metal with other influences, no atmospherically, melancholically, depressing bullshit, just rock ‘n roll! The biting guitars and catchy riffs made this album something that listeners of both Black Metal and Thrash Metal will like. Killer album! (RobinVG)