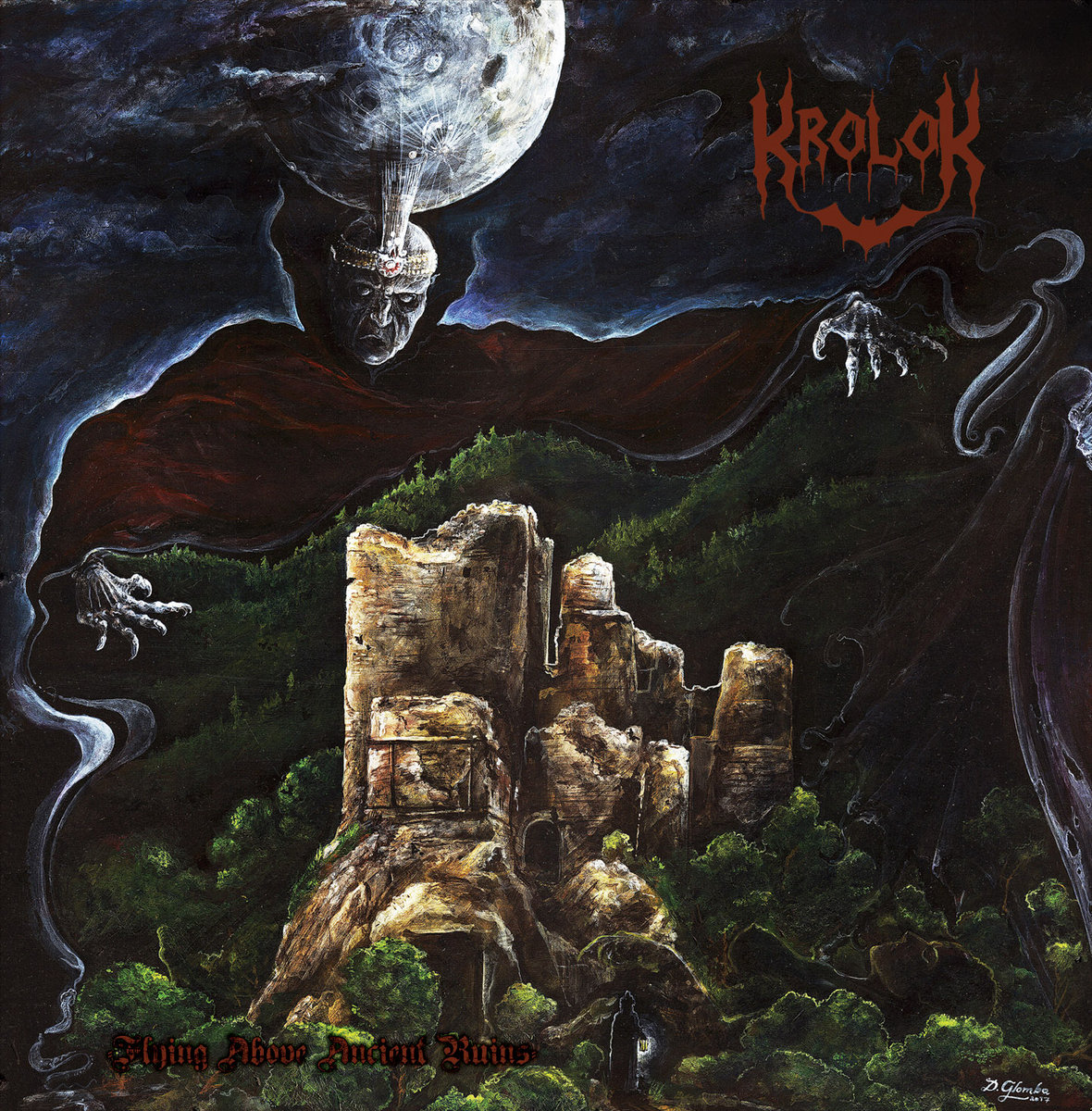 I remember the artwork for ‘Flying Above Ancient Ruins’ catching my eye in one of the distros that I regularly check. As if that wasn’t enough, finding out that the band featured members of Malokarpatan was all the incentive needed to check out the music of Krolok. It did not disappoint, and I immediately grabbed a copy. It has been a bit hard to find since its release in 2017 despite a few re-issues, so luckily when the band signed to Osmose Productions, this album and most of their back catalogue saw a re-release.

‘Flying Above Ancient Ruins’ is the band’s debut album and follows a split with Temnohor, a demo and an EP. While ‘Hunger of Her Eyes’ and ‘At the End of a New Age’ already featured on the EP, the album features three additional songs exclusively found on the album. Regardless of which track you select, each of them makes clear what Krolok is all about: Traditional Norwegian Black Metal in the vein of Darkthrone and Carpathian Forest. The influence of Satyricon’s earliest albums ‘Dark Medieval Times’ and ‘The Shadowthrone’ can also be heard, especially in the track ‘The Wanderer Ascends (Father of Sorrows and Past)’. But, the sound of their Slovakian roots is undeniably present too, with Master’s Hammer’s groundbreaking debut album ‘Rituals’ written all over the sound of Krolok. Krolok captures the essence of these bands particularly well, and knows how to produce the album in such a way that this sounds as if it was released in the 90’s. The guitars are raw, the bass sound thick, the drum sound snappy and the vocals have just the right amount of reverb. Some keyboards are delicately placed underneath it all, combining into a clear sound that’s perfectly fit for nocturnal wanderings.

I previously reviewed the second album, ‘Funeral Winds & Crimson Sky’, and came to the conclusion that it was a step up from their debut album. Now that I’m nearing the end of the review for that debut, I cannot stress enough how excellent ‘Flying Above Ancient Ruins’ already is. Based on this album, Osmose Productions signed Krolok which in a way feels like things coming full circle. After all, the record took inspiration from the classic Master’s Hammer album ‘Ritual’, one of the very first releases on Osmose Productions. The re-release of the album on CD and vinyl will hopefully allow Krolok’s music to be spread further to all that appreciate the unresistable charm of authentic and traditional Black Metal.