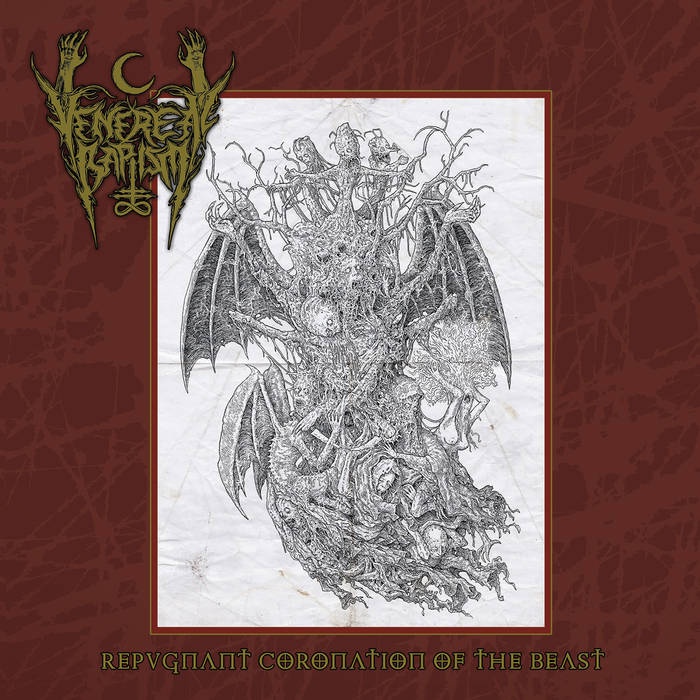 After two years, Texas grounded Black Metal pair Venereal Baptism has come up with a further ripened and pitiless record entitled “Repugnant Coronation of the Beast” which is their second full-length and third release since their commencement in 2014. This offering is sophisticated in terms of ruthless savagery that will be scrumptious for the fans of Pseudogod, Blasphemy, Marthyrium, Black Witchery and other bands who share corresponding sonority.

The album consists of ten unremittingly barbaric tracks that round upto forty-five minutes. The musicianship here is demonstrated in an unrivalled manner- guttural growls catalyzed with inferno guitar writings and piercing drumbeats which altogether produce an overpowering profane atmosphere that praises your internal iconoclasm immensely. Riffs and solos are maniacally melodic yet harsh that were placed thoroughly into the song structures. Suffice to say, influence of Death Metal riffs is very noteworthy here. The stated characteristics of all these musical notes outstandingly executed a horrendous aura that made the universe twice as heavier, evil and lethal. There’s this one track “Unfuckable Pacifist Gutterslut” that stands out distinctively than the rest because of having a Hardcore Punk/Crust vibe to it. Besides the composition, production and lyrics, the egregious artwork and mouthwateringly obscene track-titles deserve admiration too. Nevertheless, this record is a solid blasphemous combination of Black/Death profanity that spontaneously bludgeons your cranium into bile-like liquid. Consider giving this release a spin even if you didn’t find their previous works alluring, and man oh man- is this one hell of a release! (Osmani)