Gorgon – The Veil Of Darkness 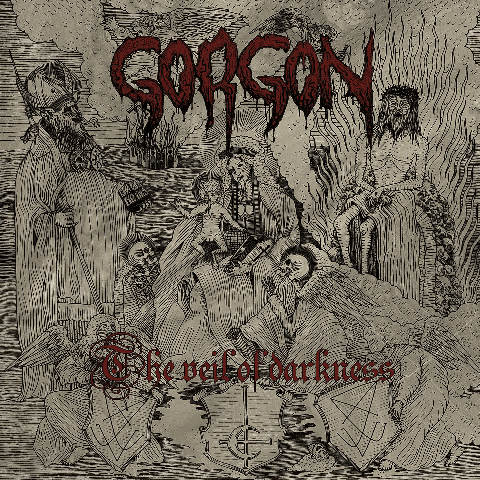 To begin with, this is not to be confused with another & much recent Gorgon from France as well. This is THE Gorgon. If you’re still dazed & confused, I suggest you keep on reading. I can’t really point out on where to begin describing this magnificent album. Probably it’s best to back-tracked a few previous albums before we get down to this. Been following all their releases since the majestic first album “The Lady Rides A Black Horse” years ago, Gorgon had already branded itself with somehow a recognizable trademark – the evilish screeching voice, old school metal and thrashier parts thrown in a little here & there, good length-worthy composition of epic proportion songs, strong bleak atmosphere of wickedness, all throughout the entire 3 album later, until it came to the 4th installation “The Spectral Voice”. There, something not very common of Gorgon had happened. I would not go into details as to what happened there since it’s not the main point here, but I’d say it was not a bad record, only least favourable for my own disclosure.

So 9 years later, this 5th album emerges. With the remembrance of the last record still in hindsight, outer inspection of this item reveals so much high promises. From the cover artwork, down to the titles & song listing, and more prominently being released by Osmose, there will definitely be nothing wrong with this. Now we get to business!

Right after the sinistrous intro ends, they storms in with raging fury! That massive wall of sounds just keeps churning out high adrenaline rush through your head. Pummeling beats of the wardrums, razor sharp guitar aural dynamics, angry orator behind the mic, it’s convincing enough to rip through the first song “Still Six Six Six” and moving forward towards the entire album. Going from one song to another is unstoppable, almost an inter-connected urge. This was made highly of the trademark mentioned earlier, with much more enhanced & excellently curated arrangements. Adding in the dynamics of the overall song structure, are the anthemic vibes they incorporated throughout the entire album. These can be heard in “Border of The Forest”, “Path of Doom”, “The Roots of My Fantasies”, “Our Crusade” and my personal favourite “Posthumous Bewitchment” of which featured a bewitching guest vocalist. At first, Onielar of Darkened Nocturn Slaughtercult comes to mind, but it was actually Cadaveria (Cadaveria/ex-Opera IX). See how furious this one already is? Let’s get a bit close & personal with the elements then. Guitar works here are rich of refreshing riffage, all alligned into creating solid song framework, entwining strong riffs after another within the course of repeated loop. This is again filled in with adrenaline charged wardrums battering the sound wall. Seems like they managed to tear down the binding veils holding them back for 9 big years, as the howling chants “we’re waiting for the dark” fades out during the last song “Our Crusade” ends.

This is tastefully lavish by any standard of a musical platter. The sound production, the compositions & arrangements, it’s massive and everything seems to fall perfectly in place. Big fat sound production. The vocals are very impressive, so primal out of all their records. This is the primarch of the old school BM. The wild alpha being.

Until this moment, I still have much liking towards their title & lyrical approach. Simple & very straight forward, without ever being sophisticatedly fancy with metaphor. They want to get down-right with the statement of intent. It’s devil’s music, you don’t need to get people confused about it. Wham-bam-hail satan. Nailed it right, get the job done.

If you’re looking to get any record with album materials worthy of your buy, this is definitely it! Gorgon belongs to the first wave of French BM, so keeping it going from then until now, growing into a very fit unit musically, this one is very strong. Dude just refused to turn soft. Haute couture, stellar six six six!