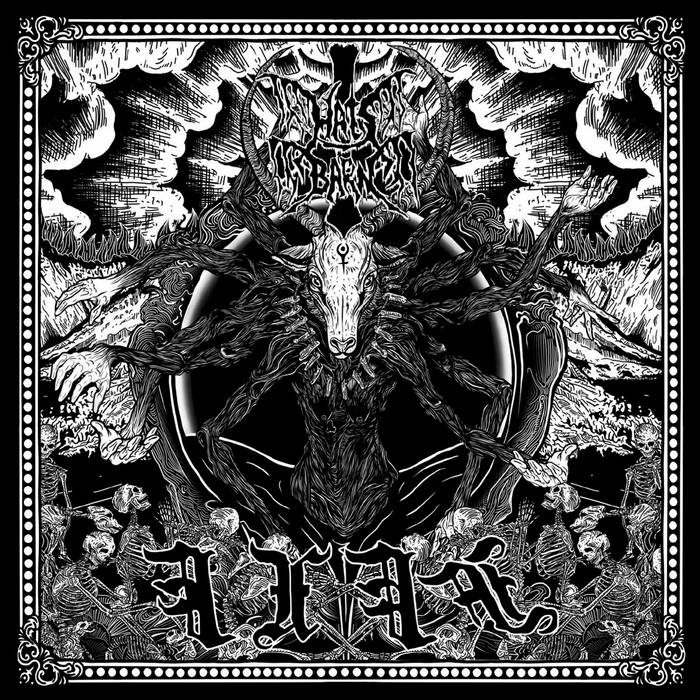 Although they have been around for 17 years now, it could very well be that the Black Metallers of Hats Barn from Lille, France, is a new name to many. Yet in that time they have managed to release a fairly extensive discography consisting of no less than five albums, mostly released by (very) small underground labels. But since they were picked up by Osmose Productions and the release of their larger-label debut ‘Y.a.HW.e.H.’, Hats Barn might not stay off the radar any longer.

Personally, I too ran into the band only two years ago when I picked up the reissue of the bands’ first demo, ‘Total Genocide Devastation’ (2022, Rempart Immortel). The thing that is the most obvious difference between that first work and this latest feat, is that there really isn’t very much difference. Sure, there is a clear progression in playing and also in production, but the essence of the music and their approach to Black Metal have not fundamentally changed. As a Black Metal band coming out of France you can’t really avoid comparisons being drawn with the illustrious Les Légiones Noir (Mütiilation, Vlad Tepes, Bèlketre, Torgeist a.o.). Now that comparison usually backfires, but in this case it’s fairly appropriate. But the main comparison lies with a scene some 2,500 kilometers up north: the Finnish. So, you can imagine a solid French foundation with a tasty excess of Sargeist on top. The maniacal vocals are the icing on the cake. Of course, this doesn’t yet have the same allure as a band like Gorgoroth, Marduk or the aforementioned Sargeist, but all in all, this is a wonderfully rattling, uncomplicated Black Metal record with an infectious late-90’s/early-00’s feel – a time when Black Metal wasn’t so complex and fragmented.

Anyone who is in the mood for a game of Black Metal with more or less the same uncompromising feeling as of the French, Finnish or Polish scene of the turn of the century is extremely well off at Hats Barn. And Hats (Barn) off to Osmose Productions, for always supporting their own native scene!