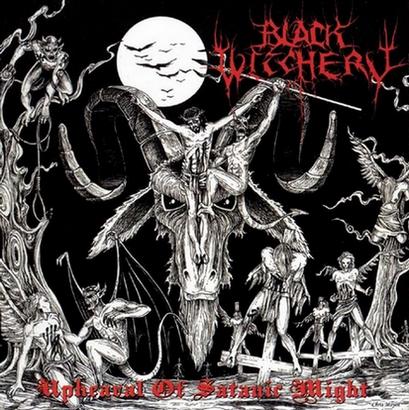 This is a band from America and “Upheaval of Satanic Might” is their second full-length album since they were founded somewhere in the early nineties, then still under the name Irreverent. And it is another typical Osmose release I’d say… After the usual cliché intro hell breaks loose. A poor sound and ‘screamy’ vocals are what defines this album by Black Witchery, which could even almost be described as noise grind or something similar. Extremely simplistic riffs that seem to have no end and which also all sound very much alike, are simply not enough to keep me interested. Add to this a monotonous pounding drummer and substandard mediocrity is achieved. There really is nothing about this album which pleases me; it is lame, boring, noise.

With this release Osmose once again serves the people who like pure noise aggression in the vein of Revenge and Beherit but fails once more to release something truly great, something this label used to be renowned for. The mere fact that some people consider this band cult is simply not enough for me. I expect a little more, sorry. (FrankVDB)