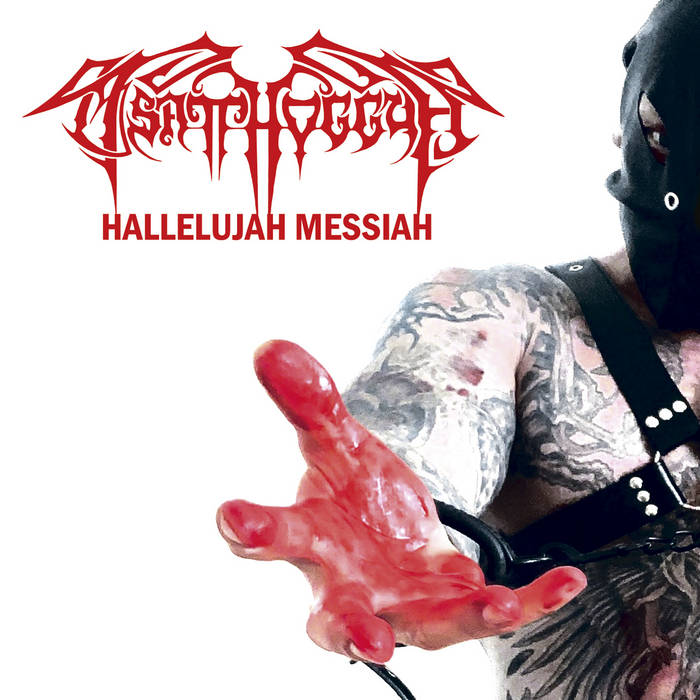 The latex masters from Germany are back! Well, on one hand really back and on other hand this is just a compilation of old material. But the original line-up with North Wind, Perverted Pete, Lightning Bolt, Nar Marratuk and False Prophet are stocking on whips, practising the hogtie and coming up with safe words again…and are rehearsing again for new material.

This “Hallelujah Messiah” compilation contains the remastered version of the “Siegeswille” demo of 1995, the one and only demo in the discography of Tsatthoggua. This demo got them signed to Osmose Productions which results in 2 full-lengths, “Hosanna Bizarre” and “Trans Cunt Whip”. In 1999 Osmose Productions released the “German Black Metal” 7” EP, which is the other addition of this compilation. After that these Germans got signed by Necropolis Records for their third album called “Extazia” which should be released in 2000, but never saw the light…for several reasons, the band just fell apart.

On the demo you will hear Black Metal in the vein of old Marduk (think a bit of “Opus Nocturne”, when they go fast and furious, and hints of the old more melodic Norwegian scene (a bit like old Ancient) due to the occasional keys and mystic mid-tempo passages (just take a listen to “Niemals Geboren”). Although being fast, they haven’t touched the Impaled Nazarene influences they were known for on later material. With the last two tracks “Status Stürmer” and “Courtesan Mary Slut” we are hearing the Impaled Nazarene meet Marduk combination.

Good to have the German dominant force back and I hope they will have killin’ comeback album. In the meantime, this is a delightful appetizer. (Ricardo)