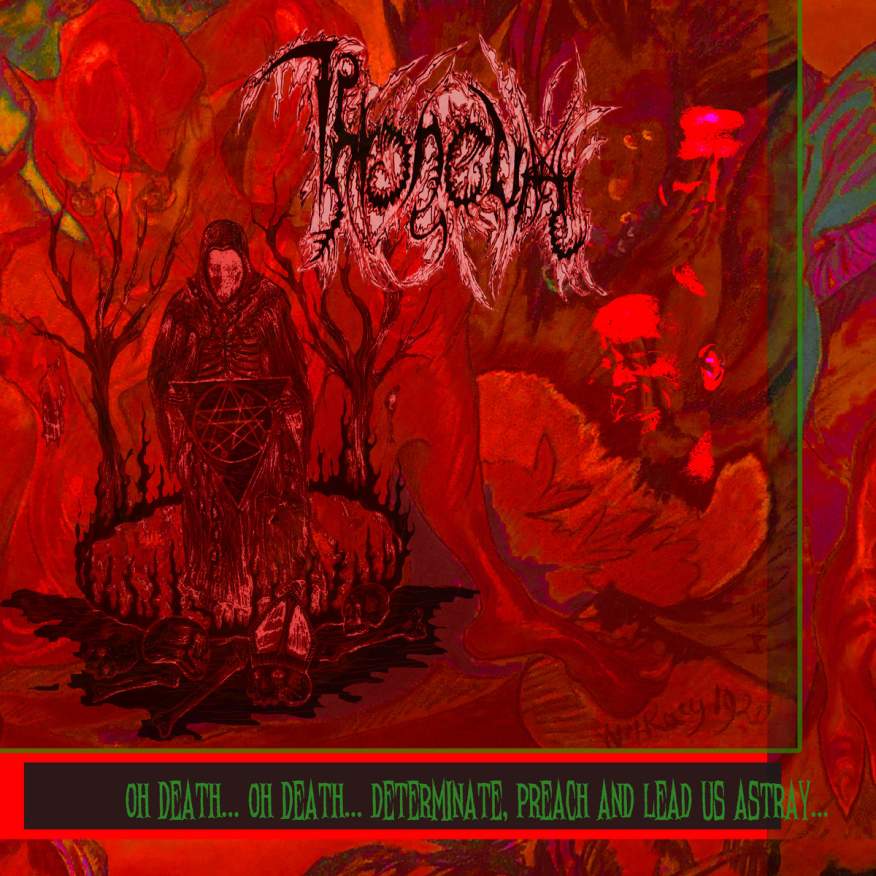 Throneum, one of the most prolific and disturbing Extreme Metal bands on the planet are back with a 6 track full length that once again rises up the middle-finger against conventional Metal.

“Oh Death…Oh Death…Determinate, Preach and Lead Us Astray” is their 10th album and continues the path taken on the previous record “The Tight Deathrope Act over Rubicon”. This time the record is “only” 40 minutes long, 3 tracks being instrumental/ambient tracks and 3 classic Nightmarish Terror Death Metal songs.

The instrumentals are short but serve their purpose, means you will be drown into horror score like soundscapes, very old fashioned but well composed. The “Metal” tracks are between almost 9 minutes to over 15 minutes long and not your average catchy hit single radio tracks. This very extreme, raw produced blackened Death Metal is complex, a maze of torment so to speak, shifting shape frequently, from slow slime induced mass of decay to fast corpse ripping piranha swarms that leave nothing but blank bones.

Throneum are not shy to experiment and incorporate even female vocals that will haunt you every single night (and maybe day). Each instrument has a lot to offer, you have to listen very accurate and probably a couple of spins to get everything.

I said about the productions that it’s raw, yes, I mean it’s not loud, clean overproduced in sounds, it’s more natural, crisp and old school in feel. The use of reverb helps to generate an even higher feeling of nightmarish thoughts. Thanks to this production, like almost the entire discography has been produced, I never feel exhausted because of the production (maybe more because of the songs itself) and that is one of the biggest achievements. It has enough punch, it crushes skulls and you can hear every single note.

There so many riffs, you will be smashed towards the ground because of its weight. This is psychedelic nightmarish terror DEATH METAL! The iron fist of the underground, the real answer to  Morbid Angel and the likes, THE DEATH METAL INSTITUTION from Poland. If you think you are Death Metal and don’t know this band, you know nothing. 20 years of Throneum, Kurwa! (DPF)