Decaying – To Cross the Line 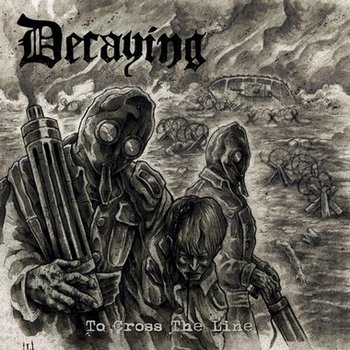 The fourth studio album since their start in 2010 is a fact…Finnish Death metal foursome Decaying have unleashed “To Cross the Line” and the only change would be that drummer Benjam Lahdenpää has been replaced by Olli Törrönen. The only change you say? Well yes, cause when listening to this album, you’ll hear back the sound they continued to follow…old school Ashpyx mixed with Bolt Thrower executed in a high and addictive form. And as usual they created this album in their own combat zone, cause when there’s a war to been fought, these guys stand tall. Tempo changes with sometimes a doomy part inserted, a flashbang of melody, then suddenly you’ll hear some nice and decent thrashy riffs and vocals that sometimes are screamy and filthy, like a soldier wounded from getting hit by unfriendly fire. Yes, everything fits and as stated, if you love your old school death metal like above mentioned bands and with a battle theme, you can’t be a deserter and have to join this fight! Track “Nothing is Free” is the most killer track on this one personally, so definitely check this one out if you’re intrigued…nope, with these guys the war is never over! (Fredde)