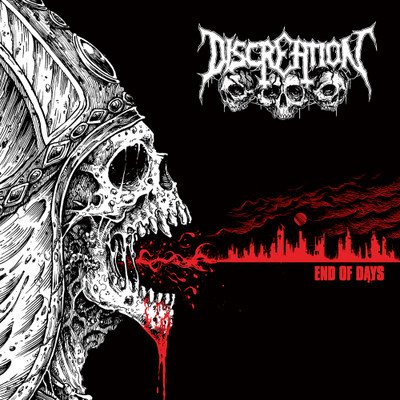 The End Of Days seem to be near If you look at Discreation’s fifth album. Andi t could be a very fitting soundtrack to it. Their new album is produced with a fat sound and enough punch without losing the “feeling”. The sound is very American,  and with American I mean Florida; tremolo picking, thrashy riffs, blasts, up tempo beats, breaks, and most important, songs with a sort of catchiness. Here and there a hint of black metal shines through the powerful death metal carpet. Morbid melodies are a good part as well and they do not sound cheesy. Discreation are not only able to go full force on power but also manage to play with dynamics, which is well done played in the middle of the album with clean guitar sounds and a monster groove accompanied with higher pitched vocals. A highlight. Towards the end some Behemoth/Bolt Thrower grooves are present, especially in the guitar-department. Definitely a great album for death metal lunatics. (DPF)