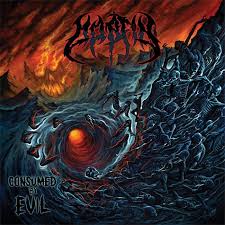 Active since 2010 California based Morfin brings you old school death metal to the bone. First a brief history about them. 2011 they released their first demo called Crystal Darkness and their debut Inoculation (killer album) in 2014. Their new album Consumed by Darkness contains 9 tracks of grooving and stomping death metal in vein of classics like Obituary and Exhorder (specially the vocals reminds me about Exhorder). It starts with the song “Reincarnated” and that sets the tone of brutality! There aren’t much negative things I can say about this album. All songs are filled with variety and the composing is exactly what you want to hear of an Old School Death Metal album. The song that I like the most is definitely “PostHomous” (track 6) which is an instrumental song of 3,5 minutes which is focused on the bass playing. It sounds amazing, does not get bored and brings a good intro for the 7th track “Contorted Truths”, which reminds me a lot of Pestilence in the good years. This album is an absolute killer album and that is right in the area of death metal that I like! To sum it up what you can expect is, well performed death metal in vein of the bands mentioned should be reason enough to buy this album! (William)