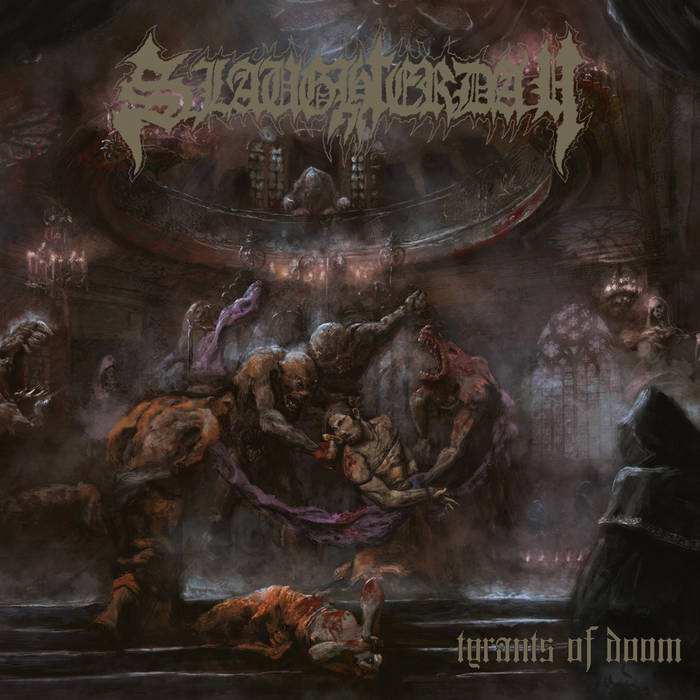 In the wake of the Old School Death Metal revival that happened around 2010, many a new Death Metal band spawned and walked the path of the Swedish, Finnish or American Death Metal scene. It brought us a slew of extremely good bands and some that seemed to simply seem to have much less to offer. Despite of its fairly decent output, German Slaughterday always seemed to belong to the latter group of bands that brought very little exciting Death Metal. A bit too neat and too predictable. Perfectly fitting in the corner of Entrails-like bands, mostly being released by labels like Cyclone Empire and F.D.A. Records. Through that last label we are being served with Slaughterday’s latest record, ‘Tyrants Of Doom’.

Having heard the album a couple of times now, it is fair to conclude that not much has happened since their last album, or their first, for that matter. They are still on that slightly Swedish sounding Autopsy-ridden path, presenting Death Metal that is by no means as filthy as Autopsy and not at all that catchy, groovy and punchy as any of the classic Swedish Death Metal bands. Combining mid-tempo Death Metal, a bit of that punkish Autopsy vibe, some elementary melodies and standard grunts simply cannot result in a smashing result. On the other band, it is not all that bad either, since its is pretty well-executed and they do not overplay their hand by going into areas they do not have the capabilities for.

‘Tyrants Of Doom’ is just another Slaughterday-album, exactly what you come to expect from the German duo. Fairly standard Death Metal that is good for a few spins but gives very little reason to get back to afterwards.