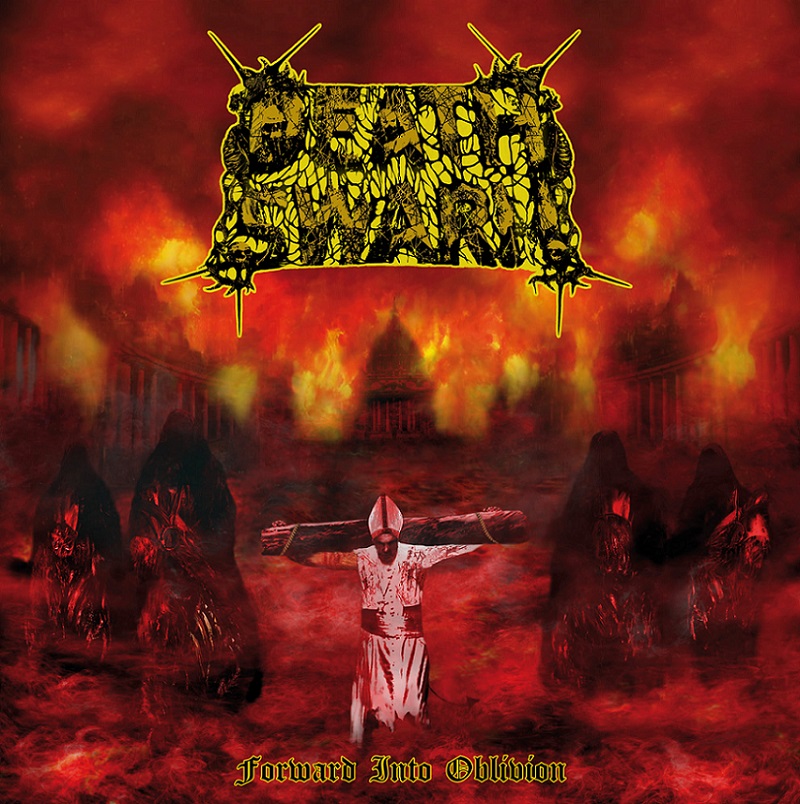 Imagine encountering the Grim Reaper in a dense forest and he says that he wants to take you next but before that he wants to play with you a bit. Soul crushing guitar riffs, heart stopping blast beats, raw Old School Death vocals and surprisingly ambient guitar solos, this is what comprises the second album by the Sweden dwelling Death Metal brethren Deathswarm.

One very unique thing about “Forward into oblivion” is that the whole album is like one long progressive metal song. The action begins in a fast and furious manner with “We Still Burn” and the pace is maintained in the next two tracks. However, the tone of “Unblessed be Catharsis” and “The Poet and The Meat Cleaver” is a bit on the classic doom metal side. “In the Wells They Await” sets the climax in a beautiful way by bringing back the past paced action with some really ambient Guitar solo. They also do a great job of teasing the melodic chorus in several part of each song so that when the chorus finally hits you will actually realize it’s importance in a much clearer way.

Another really good thing about this album is that even though it has some subtle Melodic Death Metal influences like Omnium Gatherum, it never loses its raw old school originality. Some Septicflesh like Blackened Death Metal vibes could be found in tracks like “Unshackle the Jackal” and “Army of Shadows”

I really need to write a few words about the brilliant artwork. The artwork sets the mood in an amazing way. It shows a city capitol being slowly engulfed by the raging flame while the common man still carries on with the daily labors and the power-hungry tyrants just looks on like a bystander. The artwork itself sends a very deep message and helps you realize that this album is gonna go all out with blazing guns and no hold backs.

All in all, a solid album with a lot of unique touches throughout. A must for those who are hardcore Old School Death Metal enthusiasts but won’t mind a bit of new age Melodic Death Metal doodling around the corners. Trust me that’s what makes “Into the Oblivion” different in a really good way. (Besserwisser)