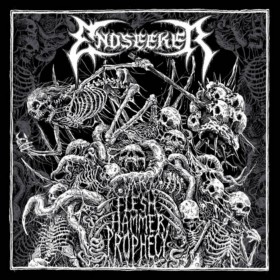 Oh, the sweet buzzsaw Swedish death metal sound… can’t get tired of it. And some bands like to grab it, use it and take it to the next level. Meet Endseeker from Germany! One of the bands taking it to the next level… The band started their career back in 2014, making their recording debut the following year with the EP “Corrosive Revelation”, which included an Entombed cover. After an absence of a couple of years, the band returned with a live split on Testimony Records (“Awakening Corpses – Live At Bambi Galore”) with Torture Gut, Devastator, Morbitory, Irate Architect and Incarceration. The same year saw the release of their first full length, titled “Flesh Hammer Prophecy”. Recorded, mixed and mastered at Chameleon Studios (Hamburg) by Eike Freese, the ten-track album is as loud and fast as you could expect it to be. Opening with a somewhat boring intro track, the album makes a 180 degrees turn right on the first track, with the velocity and fury of the five-piece band from Hamburg being displayed in all its power! They sure did an excellent job, including on the “Powder Burns” Bolt Thrower cover. Pure Swedish death metal with a just enough dose of German quality, making it one of the best releases of 2017. Don’t miss this! (Antonio)