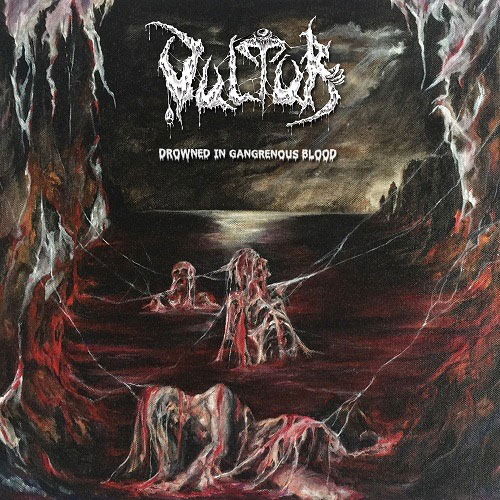 Fierce, heavy, and barbaric- are the three best words to describe the sound of Greek Death Metal quartet Vultur’s latest offering, entitled “Drowned in Gangrenous Blood”. It’s their sophomore full-length which consists of total eight unbridled Death Metal numbers. The songwriting draws its derivation from numerous vital influencers of the genre like Immolation, early Gorguts, Morbid Angel, Incantation, etc. If you admire the sound of these mentioned bands then you definitely are not going to label this album as insipid or banal.

Vultur showcased their dexterity by making the tracks sinisterly punishing and torturous that give you a spine-chilling and dreadful experience. Abrasive riff writing, destructive bass pounds, blaring drum beats and rancorous growls altogether blend really well that generate terrifically egregious melodies. When these ice-cold heavy notes are injected with anger fueled gruesomeness- it causes the corpse from necropolis to reawaken in form of zombies. Throughout this record a harshly grim atmosphere is existent that thrive the songs to be more enjoyable. Such infuriated musicianship never fails to bring forth the rancid essence of what this genre is actually all about. As stated before, the sonority of this album was illustrated from late 80’s to early 90’s iconic death metal figures which eventually shaped the songs to be more reliable in terms of ruthlessness. When death metal gets this much vile, it becomes your duty to transcend yourself into some kind of sadistic entity and relinquish the tolerance of demonstrating unspeakable gory acts upon the cynical mankind. (Osmani)