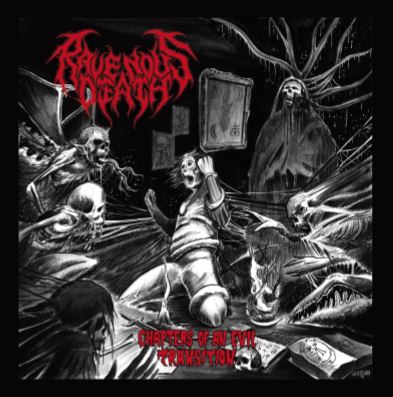 Mexico is known for many things, and excellent extreme metal is definitely among them; Ravenous Death brings the Death Metal fire with their first full length ‘Chapters of an Evil Transition’. This release has been among my most anticipated of the last few months, finally having it in my grubby mitts; I couldn’t wait to dive in. Coming off a top-notch EP released back in 2017 this group wastes no time after laying the groundwork with an eerie intro before you’re left to fend for yourself against the oncoming assault. Ravenous Death is Esteban Salcedo on drums, Enrique Fray on guitar, Victor Mercado on vocals, and Alejandro López on bass; ‘Chapters of an Evil Transition’ comes in at just over forty minutes of fiery, furious, fast, and fourth adjective Death Metal.

This is a properly evil and sinister sounding full-length from a talented band; nothing could possibly be called clean about this release, and I mean that in the best possible way. Alejandro on the bass is beyond the normal level for most Death Metal; you can actually hear the bass and it makes a difference, beyond just adding texture it can be dynamic and interesting. Enrique is in charge of the buzzing and rapid riffing on this album; fierce solos peak out through the flaying strings that normally inhabit the soundscape, stealing the show for their brief appearances. Victor Mercado is a savage vocalist which he presents in a low raspy growl; he anchors the sound of the band within the darkest corners of extreme music. Esteban is a percussion demon, and very possibly possessed; blasts and varying beats pummel across the tracks with a heavy dose of cymbal use.

‘Chapters of an Evil Transition’ is an absolute must own for anyone who even passively likes this genre; every song is its own entity, while maintaining a consistent and reminiscent sound, but isn’t just “what would happen if X-band was still around” material. Ravenous Death started out with a shit load of promise on their EP, and they managed to demolish and shoot far ahead of any expectations I had. This is a killer release full of memorable moments and a ridiculously strong full-length debut for such a young band; considering the laundry list of associated acts, it is clear that these death dealers know how to inflict aural pain. A large number of bands have been debuting with impossibly high standard setting albums, and Ravenous Death joins their pantheon. (Ethan)