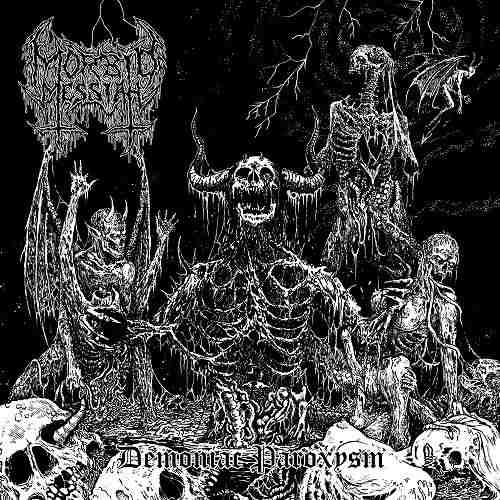 Look at that cover art! Look at it!!! It puts out a nice, descriptive picture of what’s about to go down, right? That is some nasty, old school death metal looking cover, you know, the one that sounded like the good old thrash on coke. Faster, lower, darker, more brutal than anything done before that (in the olden days) with the addition of burping like vocals directly from Hell. Did this one hit or miss on it?

Morbid Messiah are a young band from Mexico and “Demoniac Paroxysm” is their official debut full length, which was preceded by only one EP “In the Name of True Death Metal” in 2016. While the members of the band are young, most of them started their musical uprising in their teens which is obvious in how mature their music is. Since the so called ‘New Wave of Old School Death Metal’ has been on the rise in the past couple of years, you know there are a lot of releases and a huge amount of anything usually means there’s a lot of crap in it. Thank whatever force responsible for it, that’s not the case here.

Even though the album starts with an intense horror movie vibe followed by dismal guitars with some morbid riffing and precise drumming which doesn’t overbear the rest of the instruments, this is not how the whole album sounds. The pace is changing with every song, from almost doomy to ferociously fast, quickly changing the wholesome feel of the record with plenty of wicked and rich riffs, adding a fair share of tremolo picking and a wide spectre of low guttural vocals. While death metal sometimes goes by the phrase ‘putrid’ or ‘rotten’, nothing here sounds forced, but it has a nice fresh feeling. The record flows through the river of death metal, leaving others behind themselves. Absolutely delicious, filthy and nasty stuff! So yes, it’s exactly how that cover art tells it will be. (Black Mary)