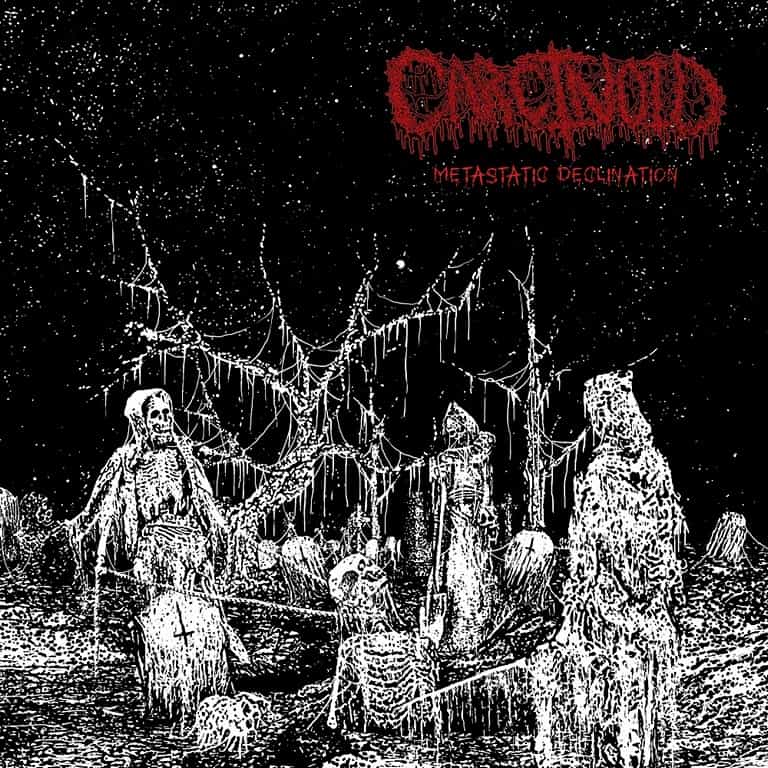 Dread…dread be upon you!  The dead have risen. Powerful dead.  Not the shambling, laughable, moaning corpses ubiquitous to zombie lore;  They are naught but corpses of the weak. Here rise execrable, ruthless, ungodly beasts.  Barbaric warriors and tyrants…Shepherds of death when in mortal form; Now transformed into herculean relics.  Corpses hardened by the cruel passage of centuries and whetted in clay. Rising through the grave…Skeletal Armageddon…In a broken march…Hatred lasts forever.  Materializing through the deepest red mist, like a descending cloud of blind rage. A flash of violence that nobody sees; They return with primitive, reanimated fury…….

Carcinoid formed last year in Melbourne, Australia, and left fans of underground Death Metal salivating for more since the release of their 2018 demo tape by Caligari Records.  It was a short undulating trek through mixed terrain pleasing to fans of such filth as Undergang, Rotted, Chaotian, Mortiferum and myriad other bands invoking the primordial essence of Death Metal.  Grim, punishing doom sections elicited the experience of trudging across sinking tar pits, transforming into blasts of chastising Death Metal as if the Earth finally split apart to allow reprieve in the form of collapsing footholds and storms of falling stone and magma.  While it was excellent, there was wavering optimism due to a number of bands falling short on producing equivalent full lengths after spectacular demos.

The album begins with an unexpectedly stimulating synthesized track worthy of repeating for hours and I wish it were longer.  It evokes the feeling of a preamble to an epic battle of the undead, as if an 80’s horror soundtrack had Braveheart ethos. Yet, akin to the tumult and chaos of war, the romantic sentiment and exhilarating tension of the intro explodes.

“Sorrow” and “Rotting Beneath” introduce the crushingly heavy and merciless sound of the album.  Hulking riffs would not be out of place in a Disma album and well executed, crawling riffs call to mind those of the legendary Cianide.  I found myself utterly infatuated with the bass and it was the definite highlight of the album for me. Although not quite the same caliber, the bass presence grabbed my attention almost as much as Steve DiGiorgio’s performance on Autopsy’s Severed Survival.  I sincerely hope other bands of this ilk take note.

Metastatic Declination really hits its stride with “The Drowning”.  It is one of the strongest songs on the album which showcases the band’s ability to construct a song well.  It is fit with thoughtful tempo changes, groove-laden and varied drumming, and a low…slow… and brutish outro.  The album courses through segments of savage, barbarous attacks impregnated with the soul of purest, primitive Death Metal interspersed with excruciatingly grievous dirges.

After laying waste to several more tracks, “Sickness” sees Carcinoid using all of the tools in their gore and shit-covered tool box.  It starts slow and builds, stomping across the corpulent mid-section of the song with the grace of a drunk Neanderthal. It climaxes with furiously bludgeoning blast beasts and some of the fastest tempos on the record before digressing into the sludge, vanishing again into the fetid Earth.

Memento Mori seem to have one of the gems in this year’s pool of no-frills Death Metal.  The production is phenomenal with pulverizing low end, dirty guitar tone, well mic’d drums and slightly cavernous vocals.  There have been a number of strong full-length releases in 2019 by Putrid bands such as Ossuarium, Cerebral Rot, Encoffinized and Fetid, as well as the much anticipated Mortiferum full-length impending.  Carcinoid is certainly sitting well within that group.