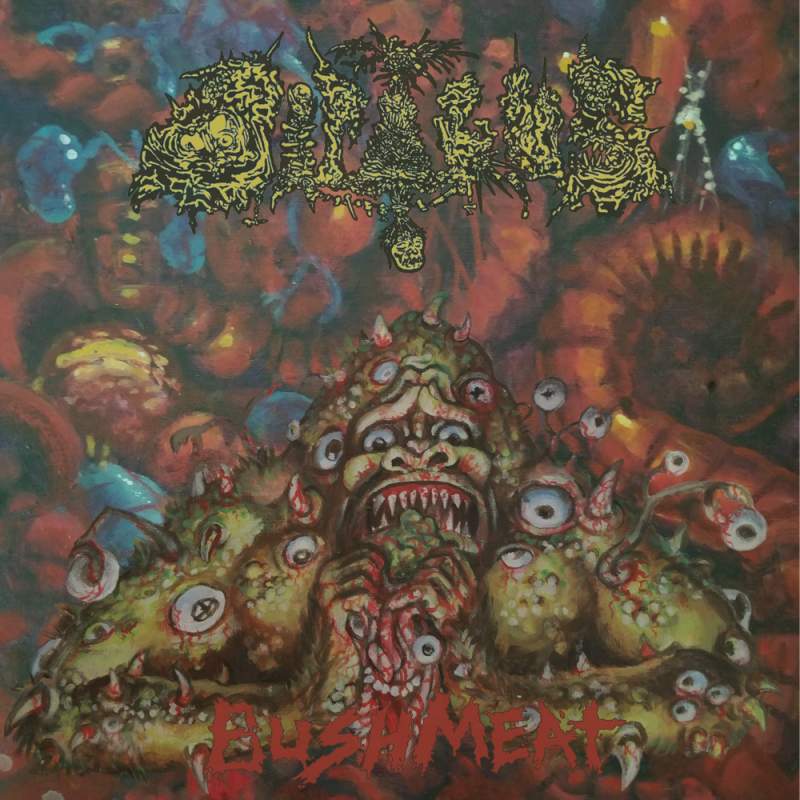 From the band’s name to horror samples used in some of the tracks including Night of The Demon (‘83) & Massacre in Dinosaur Valley (‘85); it’s strategically meticulous. Couple song titles relating to controversial creatures/legends that haven’t been confirmed as existing beings such as “St. Augustine, FL 1896”, pertains to a first known case of a “globster” creature that was debunked to being a beached whale, over a freakishly deranged octopus & “The Khumjung Scalp”, a legendary Nepal based abominable snowman, who’s scalp is supposedly on display for questioners.

Another plus is the colorfully textured album cover done by Doug Camp, has a background of gut churning insides with centered beast crushing its casualty, malformed & eyes galore on this disfigured, thorned monster. Inside collages of cryptozoological news story lines with grizzley clippings were created by bass player Dayan, something to point out to give the listener a better visual and understanding/appreciation for this LP.

Features nine tracks, 37 minutes of engagement, you apprehend the abundance of OSDM influence, hefty amount of blasting from drums, steady amount of groove to allure you into their unpredictable time measure to keep you entrapped, even slivers of melody to remind you these barbarians have a bit of tender side to their writing style, credible on longer tracks like “Osteodontokeratic Savagery” & “Plasmoidal Mass (Slime Mold) (this particular one has doom riffs & favorite solo, tis gorgeous!) Selt title “Bushmeat” production comes off as an organic Autopsy styled jam session, halfway drawing out the drum portions and then BOOM comes back full force hammering away with those miry vocals doused in viscous matter.

You will NOT be disappointed! (Tori Belle)