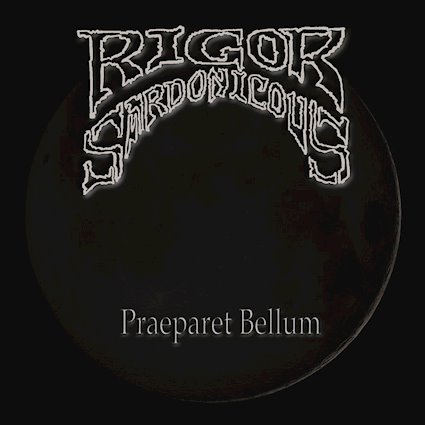 In my own humble opinion, this year has set a remarkably high standard in terms of Metal releases. But, if ‘Praeparet Bellum’ is anything to go by, 2023 looks set to be even better. This is the first full length album that Long Island duo of Glenn Hampton and Joseph Fogarazzo (And their able bodied side-kick, a drum machine) have unleashed in over a decade, and not only have these grizzled Death Metal veterans not lost their touch, they are still thriving and concocting classic old school Death Metal laced with Funeral Doom. Yes, Rigor Sardonicous are back ladies and gentlemen, and with a new CD release through Memento Mori, things couldn’t look bleaker!

The very opening tones of ‘Caelum Ardere Vidistis’ are enough to rattle the fillings from your teeth, and the weaker amongst you may be in serious danger of voiding your bowels. Music reviewers use a lot of superlatives and adjectives to describe albums and I’m no different, but I’ve met my match in ‘Praeparet Bellum’ which proves that all of those superlatives and adjectives used previously are superfluous when faced with a true heavyweight of Death Metal. I throw words like crushing, and intense around a lot, but this album defies both terms. ‘Praeparet Bellum’ sounds like a big kid in a playground, squashing a cockroach with his foot in slow motion, just to hear it crunch and squelch, to savour the moment of destruction and ultimately, death. It’s a lava field, trickling its fiery death down the mountain side, whilst all in its path suffer the interminable wait before filing being overwhelmed and subsumed by inevitable, painful oblivion!

Put into musical terms, ‘Praeparet Bellum’ is eight tracks of punishing, monolithic riffs and drum tones. Eight tracks of bone rattling bass tones and vocals that sound like they have been summoned from the very deepest depths of hell before being growled out into the world in a thick black smog of evil and savagery! And all of this is played out at a snails pace, not once does the tempo of this album increase and it is all the more feral sounding for it! An album of the year contender before the end of January? It doesn’t seem fair does it?