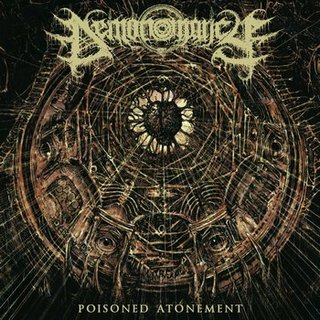 The Roman empire strikes back. Demonomancy from Rome are presenting their 2nd full length “Poisoned Atonement“ 5 years after the debut „Throne Of Demonic Proselytism“. They made a huge step forward, mostly in the song writing department. There is more variation, for example excellent changes from fast blast driven versus ten thousand tons of groove, Bölzerish kind of atmosphere here and there and some great heaviness in a Sadistic Intent style in the 2nd half of the album. The vocals are fantastic. Witches Whipping and Herald Of The Outer Realm are sharing the vocals (the latter doing backings) and change between deep grunts, a deeper version of Bay from Sadistic Intent and some Venom like singing/growling style. And speaking about Venom, they incorporate chants and black`n roll riffing between all the chaos (blacker version of Carcass and I guarantee it is not cheesy at all). After reading all this, don’t worry, it is still all black/death what you can expect from these guys.  This time with improvement on song writing and variation, one song ends even with clean guitar and the next starts with drum and bass only right away. Trance like moments make you drown into the fiery waters of the abyss facing nothing but dark blasphemies from the soul for the soul. Here shines the brilliance of Demonomancy on full splendour, making the last songs the best of the entire record. Grave Miasma and Bölzer couldn’t have done it better. This album turned out better than expected. No matter If most is played on same or similar tones/scales, there is so much variation that it doesn’t get boring. Black/Death lunatics should check this out as soon as they can. Grandi. (DPF)