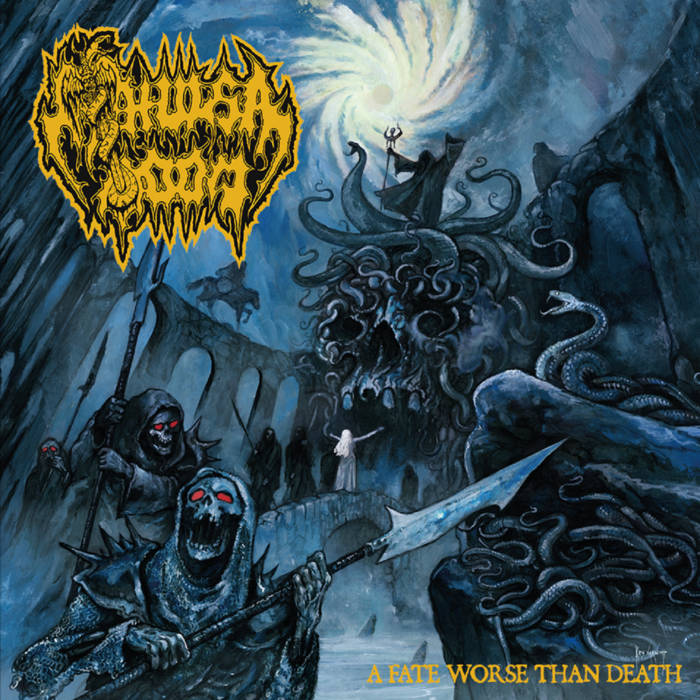 We are only three weeks away ‘A Fate Worse than Death’. Don’t worry that isn’t some tin foil hat wearing conspiracy theorist with an apocalyptic doomsday prediction, rather the debut album from Italian Death Metal horde Thulsa Doom! Released via Invictus Productions on both CD and LP, ‘A Fate Worse Than Death’ is the follow up to 2018’s first offering, the ‘Realms of Hatred’ EP, and comes packaged in stunning artwork that will have the pulse of many a Death Metal fan racing with anticipation!

Where the EP introduced the Italian death mongers to the world with a groove drenched catchy style, ‘A Fate Worse Than Death’ eschews previous traits in favour of outright brutality from the word go. Opening track ‘Where Death Dwells’ is a lethal concoction of darkened guitar leads, drumming based savagery and forceful, aggressive growling vocals, whilst ‘Cursed Domains Beyond’s’ only nod to catchiness is a very single chorus, although the rest of the track tries it’s best to bludgeon you to death before unleashing technical guitar solos as if to say, “See, I like you really”.

It isn’t until ‘Into the Vaults of Angmar’ (A nod to Tolkien and Lord of the Rings) that Thulsa Doom consent to a little groove to enter their sound, though this thuggish battering ram of Death Metal still pulverises with a slower, more crushing tone from the guitars, dirty sounding bass play and raw old school drumming, as well as some savagely intense guitar leads later on melding around superb solos. It isn’t until the instrumental title track that a cease fire in the constant barrage of noise is called and a bass heavy brooding atmosphere descends. Yet like all famous cease fires, hostilities soon resume and the hammering tones and riffs rain and reign once more!

For me the track of the album is the brutally chugging yet oddly catchy ‘Hung, Drawn & Quartered’ which sees Thulsa Doom dabble in a little Cannibal Corpse worship whilst keeping their own musical signature imprinted firmly on the music being produced. So ‘A Fate Worse Than Death’ is a very solid debut album with an overall aggressive unrelenting nature but displaying enough interludes to the carnage so as not to become stale. Be sure to give this one your undivided attention. (Luke Hayhurst)