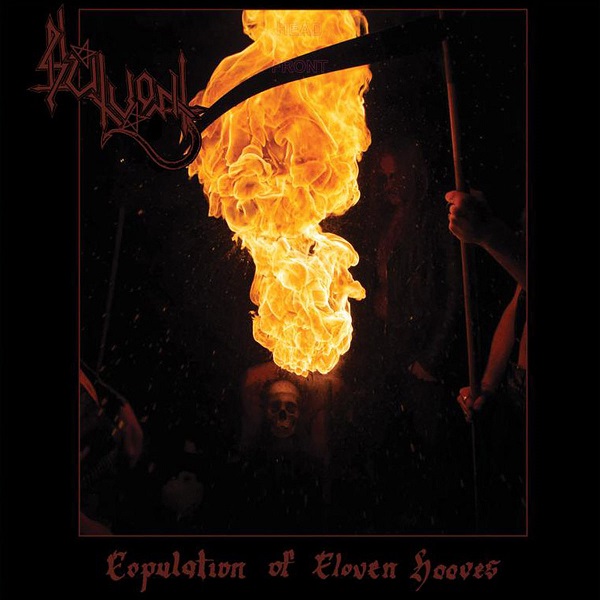 Slutvomit from Seattle, Washington are serving up a fresh dose of satanic hatred on their sophomore album “Copulation of Cloven Hooves”. Galloping forward on the blazing trail left by their debut “Swarming Darkness (2013)”, Slutvomit carves a path of darkness brooding with the eternal forces of Black, Death and Thrash metal. Influenced by the invocations of acts like Nifelheim, Possessed, Morbid Angel and Destroyer666, the tracks conjure a blunt force of unholy Heavy Metal.

In the current scene of weak as fuck Comedy Central sponsored tours and ironic satanic cartoons, “Copulation of Cloven Hooves” bursts through the cloud of shit with a reminder that evil and darkness still exists. Buzzsaw guitars, howling vocals, thunderous drums and roaring bass are presented with a rude attitude snarl of crush the weak.

Production wise, the sound is crisp and balanced with a touch of hellfire and loudness. The guitar work on the album has subtle hints of 80’s classic Heavy Metal legends such as Judas Priest, Iron Maiden and Venom. Riffs that are both melodic and devastatingly heavy show the progression in the song writing from the debut album and a forceful presence of evil atmosphere exudes a confidence of trampling over the weak masses. Few moments on the album show a feel of sameness and mostly there is a variety of riffs with speed and mid-tempo variances that keep the legions locked into the evil worshiping sounds.

“Copulation of Cloven Hooves” is a solid sophomore release that shows that Slutvomit stand as masters of the dark arts atop the end of the world. (Ted Gloom)