Atramentum – Through Fire, Everything is Renewed 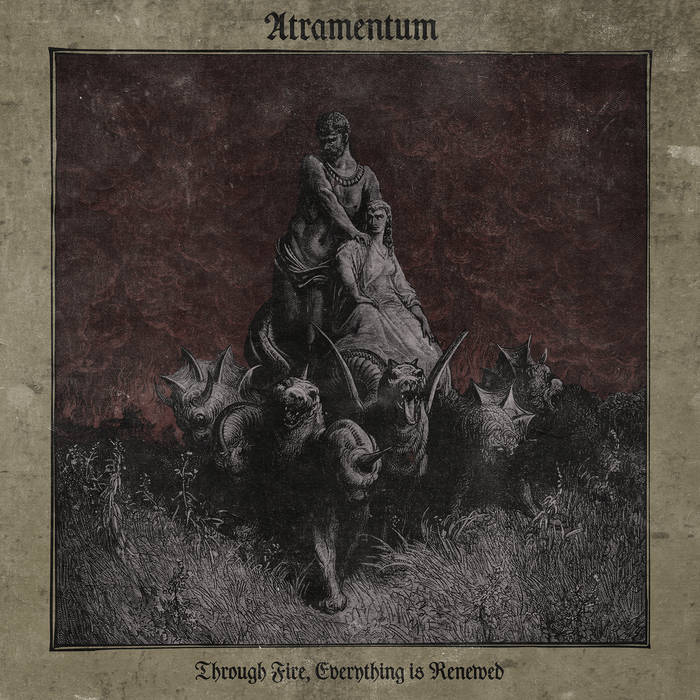 Earlier this year UK based Satanic duo Atramentum unveiled their sophomoric album entitled ‘Through Fire, Everything is Renewed’, a full five years after the release of their debut opus, ‘Aischrolatry’. Their first offering was a self release, but this time around they have seen their work released through label Invictus Productions on both CD and LP, and the album comes complete with impressive cover art.

A tense build up of dark forces and the famous quote from Robert Oppenheimer after he witnessed the first detonation of a nuclear warhead that he had helped create, ‘now I have become death, the destroyer of worlds’, and then we enter the chaos. Opening intro track ‘I’ is an unbalanced sounding beginning, and ‘II’ continues that same maniacal trajectory. Atramentum’s style if one of bleak confusion; a lack of cohesion brought about using a frenetic and sporadic drumming style, cavernous and wild, as well as desperate guitar tones and raging growled vocals. Only the constant throb of the bass offers any real consistency.

Like day leads into the gloomy dangerous depths of night, so ‘III’ moves into ‘IV’ and then into ‘V’ and so on. The uneasy clamour never abates, and the atmosphere is like charged particles of dark electric current, sparking, igniting, burning out and then alighting again in a never ending cycle of colossal upheaval. I can’t pretend to like ‘Through Fire, Everything is Renewed’ on a personal taste level, but I certainly respect the chaos that it wreaks.