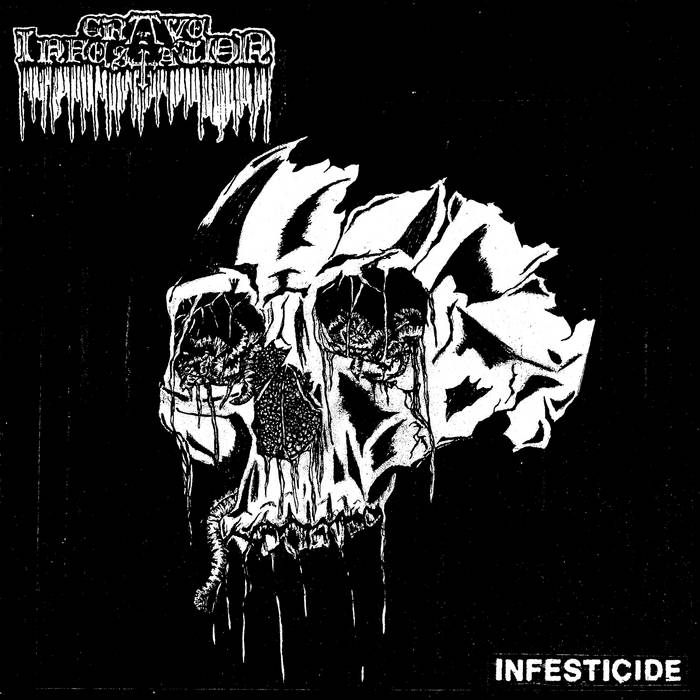 To commemorate the release of Grave Infestation’s first full-length album, Invictus Productions also released this compilation LP (so far only released on vinyl) of the Canadian’s first two demo recordings. Both of these demo tapes have already been featured on VM-Underground, so this is more of a retrospective view on those early recordings.

These demos are presented in chronological order, so that means this compilation starts off with ‘Infesticide’-demo from 2018 on side A, displaying the band’s rawest side. Its rabid aggression and utterly revolting sort of sound give these recordings that appealing crunch. The ‘Infestation Of Rotting Death’-demo from a year later has a bit of a louder and less dark sound and vocally reminds me a little of the fabulous Horrendous demo. It might come as a total surprise that the Autopsy/Entombed vibed Grave Infestation came up with an Entbombed cover (‘But Life Goes On’) as well. The horror-tinged intro and outro also really adds to the overall old school ambience.

For those who do not have the original demo tapes, this LP is definitely a great opportunity to get them both at once. Invictus Productions again did an impeccable job of picking these Canadians up from Death Metal’s rotting sewers.