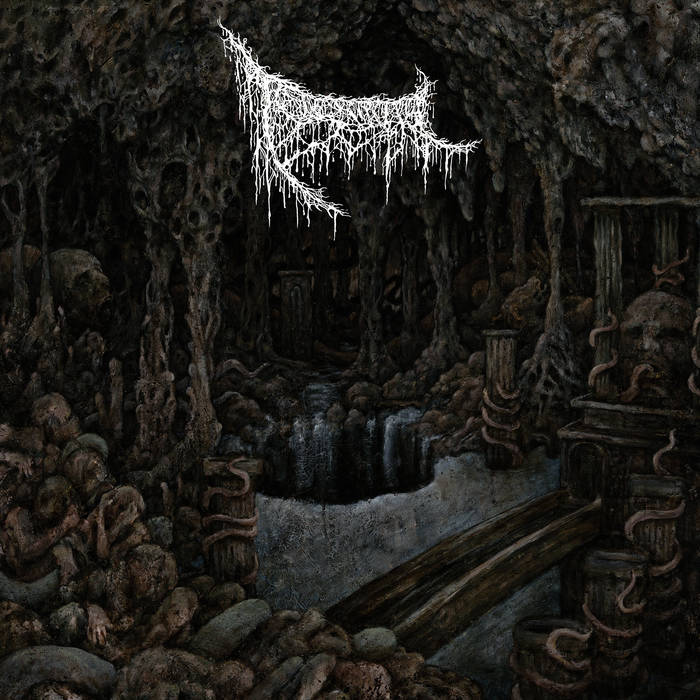 Every story comes to an end and it’s especially heartbreaking when one of your favourite musical artists announces their upcoming release is (possibly) final. Throughout the years and four releases (and fifth one pending) Portland’s Triumvir Foul have crushed some of us with the devastating news of their pending album as being their final one. But going through their discography and manically listening to the entire set of three full lengths, a demo and an EP, it soon came clear why.

From the Swedeath inspired demo ‘An Oath of Blood and Fire’ things proceeded deeper into the darkness of more and more cavernous death metal with each release and it’s reaching its peak (or the basement under the rock bottom) in the third full length ‘Onslaught to Seraphim’ (to be released at the end of July). What started out as a story of three snakes borrowed from Sumerian mythology as an allegory of hedonism, cabalisticism and corruption and on this album, we face their demise and carnage of angels for their righteous existence. So what could possibly be left afterwards? If you think of Triumvir Foul as a conceptual act which came to life on the sole purpose of explaining this idea only, it can make sense of that ‘(possibly) final’ phrase (or that could just be me with hopes of again hearing something from this duo).

Musically speaking, the overall cavernous death metal which has escalated profoundly through the discography, embodies the spiritual turmoil and existential horror and you can almost see the three ‘protagonists’ (Hedonism, Cabalisticism and Corruption) in their snake form we became familiar with through the bands previous releases, face their demise and going to heaven, where they do what they do best: destroy the angels and shatter the place into absolute oblivion.

Knowing this band and their work I can definitely say, this is their best work as they have ever done and what a better way to go out than with a severe bone shattering, deafening, horrific bang? (Black Mary)

Though folks may favor or object this style, it excels production wise compared to previous 2019 EP “Urine of Abomination”, equally balancing all instrumental components, percussion in particular capturing each blast, tinge & double bass kicks. Vocals are thundering, brutish, & reverberated as if being resurrected from the bowels of hell.

Prior LP covers done by the late Timo Ketola (RIP), but M.S. does an impeccable job sticking within the previous two covers concept of an unsettling space that’s elaborate without the cliche bloody gore, sends chills because of its details fits in with this duo’s musical vision.

This falls a couple minutes shorter than “Spiritual Bloodshed”, but packs a punch within its thirty-seven minute duration, stretched between eight tracks. few lengthy tunes such as “Domini Befallen (To Doom)”, particularly dense yet abrasive that leads into the lento paced intro of “Bašmu Enthralled, Horned Creations” with deranged explosive tempo in the middle descending gradually into subtle doomy outro. Out of the more swift songs aside from teaser “Flesh Diocese”, I favor both opening “Presage” because it goes straight into the core of what they’re honing in on for the entirety of this album as well as “Serpents’ Gnash For War” because I love the way the bass resonates on this specifically as well as the dissonant riffs that compliment it, grabbing my attention overall.

Generally a great progress for these guys for those who’ve been a fan since day one will appreciate their efforts. (Tori Bell)