Grave Infestation – Persecution Of The Living 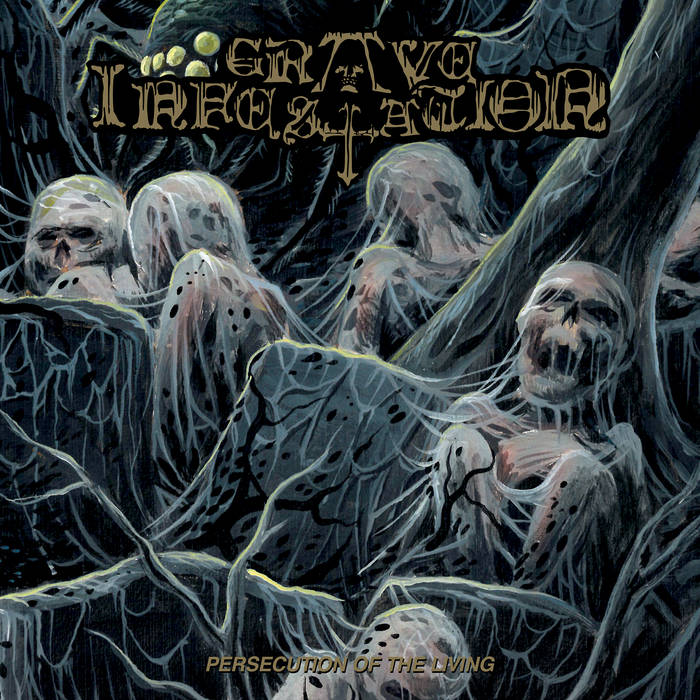 Old School, rotten, infectious Death Metal from the grave, that’s what this four-piece Canadian band is offering you. And if you have been reading VM-Underground for a while, you might have already read that in both reviews of the band’s earlier demo-recordings that we published in recent years. Maybe even the interview that we’ve conducted with the band. In that particular case you can save yourself some time and stop reading, since the band has stayed true to their initial roots, this first debut album is completely in line with what the band did over these first formative years.

But, for those who like to keep on reading, here we go. Like Ricardo commented in his review on Grave Infestation’s second demo, ‘Why fix something if it isn’t broken?’ I suppose the band took that as their starting point for the writing process for ‘Persecution Of The Living’. Apart from the sound that is a tad less raw, not much has changes since those demo years. But if we choose to zoom out a little, Grave Infestation still doesn’t offer anything new, not by a landslide. But what the band actually does, is serving us with some utter deadly effective kind of Death Metal, still very much based on that so beloved tipping point between Autopsy and Swedish Death Metal. It doesn’t wear that obvious Swedish buzz-saw, but it unmistakably bears resemblances to that primal Swedish Death Metal scene. Sporting that same raw edge and basic song writing. That same rather simplified nature in song writing is also pretty close to that punkish vibe of early, ‘Severed Survival’-era Autopsy. Grave Infestation blends those together in a highly efficient and competent way with a mean, gruesome sound as a result.

The secret of its potency might be found in the band’s ability to write decent songs, to begin with. The tracks are all very decent in length, roughly ranging between the 3 to the 5 minute mark, together clocking just 37 minutes. But, in fact, it doesn’t at all feel that long, all the tracks have enough variation and dynamics to prevent your attention to waver. Its mainly up-tempo pace also helps the band to stay miles away from most of its mid-tempo Death Metal peers, who practically all have problems performing a full album of interesting songs.

Because of all this, it might not come as a total surprise that a quality label like Invictus Productions decided to pick the band up. Besides this new album, the label simultaneously released a compilation LP (only available on vinyl, for now) containing both demos. So, you know where to go to if you’re in for some good Old School Death Metal that doesn’t scare you away with any experimental oddities, but on the other hand doesn’t make check out halfway and snooze you to la la land either.