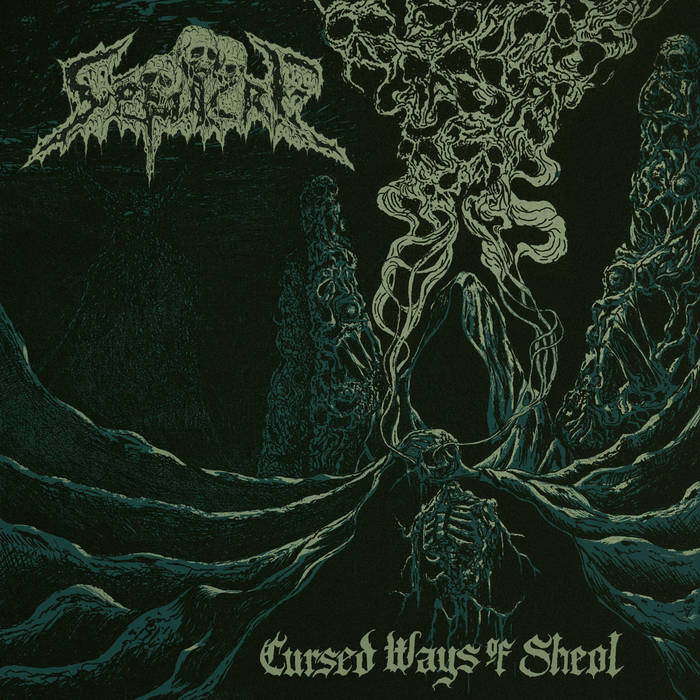 Not long after having their name changed from Demonic Oath to Sépulcre, this four-piece came out with their first demo, ‘Ascent Through Morbid Transcendence’, which grabbed the attention of the Irish purveyors of putrid Death and Black Metal, Invictus Productions. Not only did they come up with a re-release of that demo on both vinyl, cassette tape and CD, they also struck a deal to release the band’s upcoming release. That materialized into this new EP ‘Cursed Ways Of Sheol’.

The transition from Demonic Oath to Sépulcre came with a slight change of style too, the more traditional Death Metal was exchanged for a sound with a blacker edge and a more technical character. The result was something somewhere between Demigod, Necrowretch, Drowned and Incantation. However, this new EP does not show another shift in musical direction, but the band does make its intentions clear. This is patently no longer a demo, the rough-and-tumble nature of those first recordings are gone and have given way to a pretty modern but mostly heavy sound. The quality of song writing has also advanced, which shows especially in the more exciting compositions where a more natural balance seems to have been struck between the ingenious riffs and the dark atmosphere. The extra built-in dynamics keep the listener on the edge of their seat. The good production, in which there is much more space for the individual instruments and the calmer passages, propel the dynamics to much greater heights, giving extra energy to the tracks. Incidentally, the brighter production does not come at the expense of the oppressive atmosphere created, quite the contrary. While the rougher sound on the ‘Ascent Through Morbid Transcendence’-demo worked well, this is an undeniable step forward and places the band in the ranks of musically similar bands like Dead Congregation and Grave Miasma.

Combining Death Metal with Black Metal is of course far from original, but by heading further away from the well-trodden Incantation adored paths and building on the Black Metal influences and adding a technical twist, Sépulcre definitely manages to convince. This 23-minute EP could very well be a first stepping stone to something bigger, the band proves to have all the right tools. For now this new EP has only been released on CD format, but knowing the ways of Invictus Productions, we can be sure that analogue formats will be in preparation. It’s just a matter of patience for now.