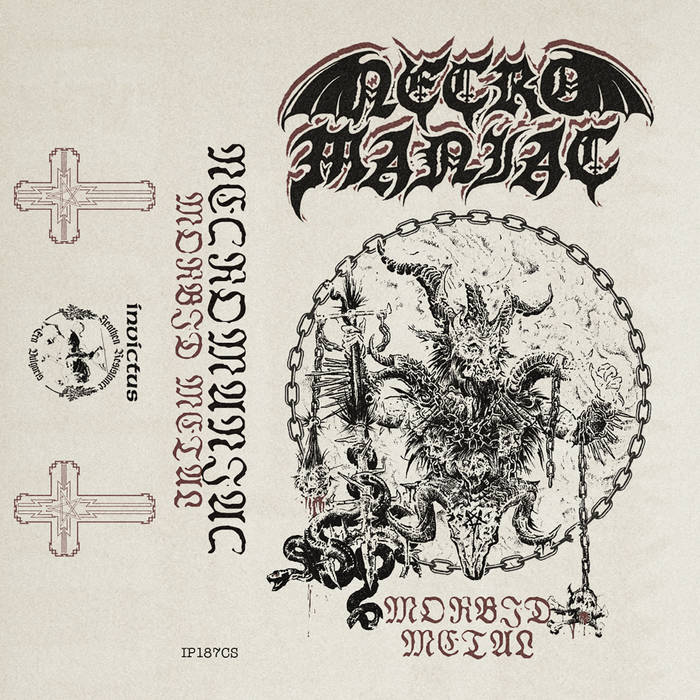 Originally released in 2015 by Me Saco Un Ojo Records (and already reissued a year later) Invictus Productions thought it was about time to give this demo by London based Necromaniac a second life. Compared to the first run of tapes it has very same tracks, but it is graced with a new cover.

The regressive blend of Black Metal, Death Metal and Thrash Metal sounds as authentic as they come, with obvious and overly kind nods to bands like (old!) Sepultura, (old!) Kreator, (old!) Slayer, (old!) Possessed, (old!) Slaughter, (old) Sarcófago, (old!) Venom and Necrovore. Fairly sharp riffs that are not all too different from pre-‘Reign In Blood’ Slayer all soaked in a rather chaotic and raw, yet thin production. The bands’ obvious penchant for classic Heavy Metal shines through, as well as the individual bandmembers’ experience in their other current and former bands which include names such as Razor Of Occam, Lvcifyre and Indesinence.

The sound, partly due to the somewhat thin production, sounds so authentic that this demo tape could have just fallen out of Marty’s DeLorean. It’s just fine that Invictus decided to keep this tape in print, but I think a (10″) vinyl EP would also be a more than suitable format for this excellent piece of Old School metal.