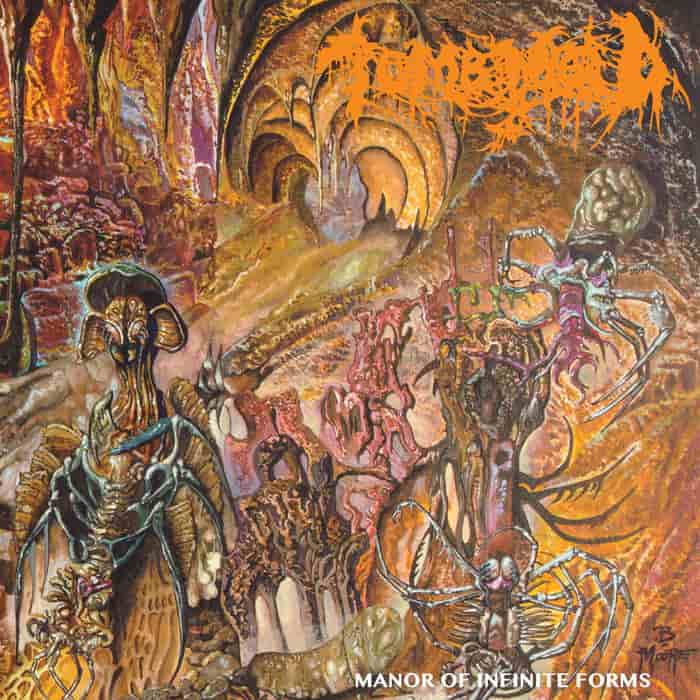 Where to even begin? This is the second album from Toronto based death metal band Tomb Mold and this is what death metal should sound like in 2018. This is gritty, atmospheric and heavy as elephant balls. This is also the type of album that proves you can have flairs of technicality without resorting to sweep picking pyrotechnics. Above all there are just some exceptional riffs to be found here. The opening title track is just an expertly written song that jumps through a lot of hoops and never misses a step. Everything from outright blur inducing blasts, to slow sludge and even a section in the middle that seems to draw from the speed and simplicity of hardcore. It’s nearly 5 minutes and feels like it hardly breaks the two minute mark due to the bands conviction and stellar songwriting ability. The second track “Blood Mirror” brings in a truckload of dissonance and a lot of groove before exploding at around the 1:38 mark into a super thrashy and melodic riff that just demands for head banging. This is also one of the longer tracks on the album and with that extra time the band really opens things up and has some excellent melodic soloing and creepy memorable riffs towards the end that bring to mind Blood Incantation. “Final Struggle of Selves” opens with an awesome groovy sludge riff that they manipulate and bring back throughout the entire song forcing its way into your brain with little regard for the damage left in its wake. Each song has at least one “oh shit” riff. The type of riff that makes you listen to the song again after it has finished.

The vocals are firmly rooted in a Finnish death metal, early Incantation type of feel. Super guttural and powerful adding the perfect layer of filth to an already gross album. Also of note is that the production is pretty much perfect and for such a cavernous vocal approach and bombastic musicianship, the mix is clear and everything comes through with a ton of power. This album comes highly recommended and is a definite candidate for death metal album of the year in 2018. Few bands can write music this powerful, original and earth shaking heavy. Don’t sleep on Tomb Mold, these Canucks are the real deal! (MikeH)