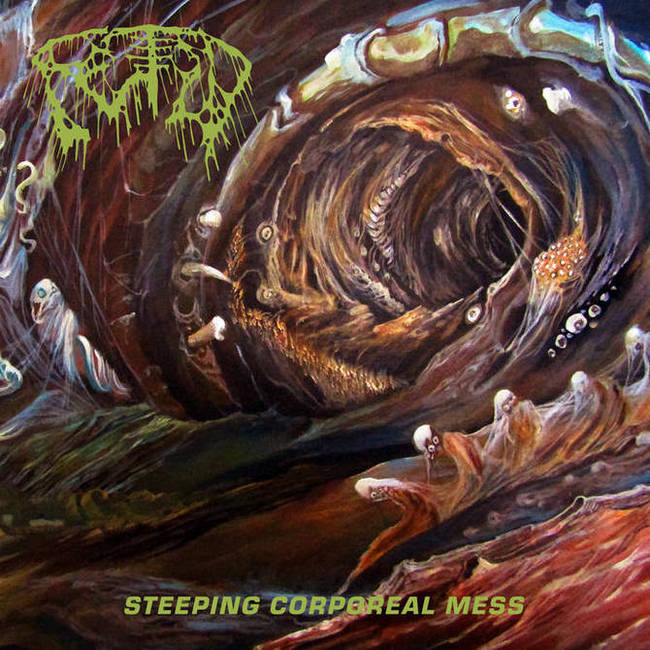 Man, what a time for Death Metal! With all of the new emerging acts and even old school guys coming in and just completely revamping their sound it is truly an exciting time for bands and fans alike! Bands like Tomb Mold, Hyperdontia, Undergang, etc. It’s like the filth gets stronger and stronger with each passing year. And now we have a band as putrid, and slimy as them all. Insert motherfucking Fetid! From the murky waters of Oregon these guys bring riffs as unclean and vocals as disgusting as all of the aforementioned bands.

Coming of an absolutely crushing demo, “Sentient Pile of Amorphous Rot” these guys are here to stay and with the awesome crew over at 20 Buck Spin that recently just signed them, it looks like it’s a foregone conclusion that Fetid is gonna be bringing us their stench for some time and I couldn’t be happier to smell it!

The new album titled, “Steeping Corporeal Mess” gives us only 5 tracks but clocks in a 32 minutes so there is plenty of riffs to get familiar riff. Starting off the album you get the stench like it’s, “Reeking Within”  With the sound of my bong bubbling straight in to a sour stomach inducing riff that is a mid paced head banger that keeps that speed through it all and then rolls right into some more unclean chugs!

Not everything is a sludgy as the first with songs like, “Dripping Sub-Tepidity” brings more of an upbeat really blasty side of the band that you’ll get more familiar with once you buy this album because trust me. You’re gonna want to buy this album! One of the best of the year! Everything about it is great from start to finish. The songs are long and intricate, the production is fantastic and it’s safe to say that 20 Buck Spin has one of the best rosters in the game and adding Fetid just makes it that much better! (JonG)