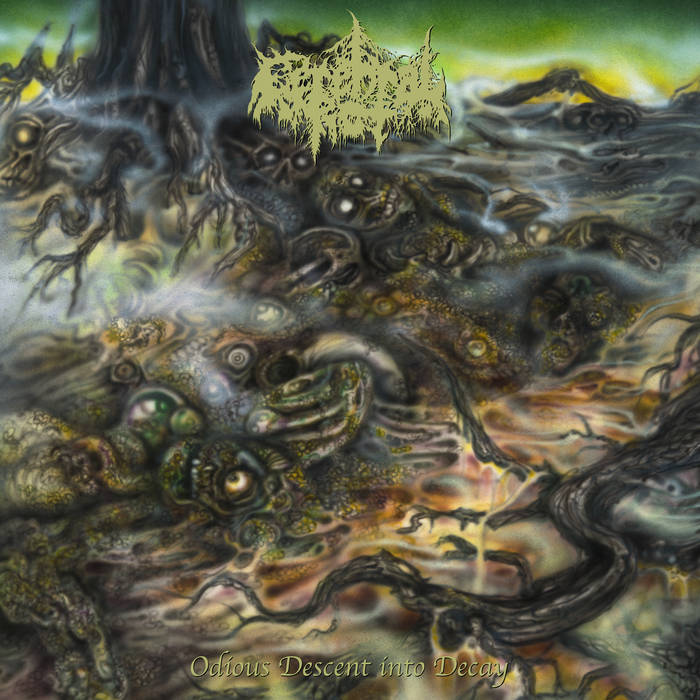 Lumbering monsters of cess pool putrefaction and rot boil up out of the swamps of Death Metal disease and puke forth the debut album “Odious Descent Into Decay” by Cerebral Rot. What a massive slab of rotting putrid Death Metal this album is, killing everyone in it’s path, reanimates them and then kills them again. In today’s underground scene, there are hundreds of OSDM worship bands trying to capture the g(l)ory day sounds of the early 90s, plenty are just generic and fall through the cracks, Cerebral Rot sticks out like a big jagged nail waiting to pierce your skin.

“Odious Descent Into Decay” is full of clever and catchy riffs while maintaining a heaviness saturated in mud and dirt. Reeking riffs of doom, d-beat punk and Swedish death are strung together throughout the nine tracks and lumber forward with a doldrums dirge. The production of the album is a resonating buzz of swamp soaked amps and hammering drums with a live from the jam space feel that contains just enough clarity to not be polished, you can almost feel the sound bouncing off the walls as they drip with filth. A part of the albums charm that separates it from the pack is the weird and creepy guitar leads that come in and out of the tracks, proper use of effects and mixing give them a kind of “floating in the background” feel like it’s something trying to break through but can’t fully penetrate the muck wall of Death Metal. Vocally, it’s exactly what you would expect, swamp-thing vomiting forth unholy verses of horror and dissonance.

With songs titles like “Reeking Septic Mass”, Foul Stench of Ruination” and “Swamped In Festering Excrementia” I think it’s safe to say that Cerebral Rot want to conjure a sense of filth and depravity on a whole new level of psychosis. As I mentioned early the songwriting is clever with bursts of punk style speed in most of the songs that break out from the death/doom riffs and feel like getting blasted in the face with just enough septic diarrhea to shake things up. As there are no songs under 3 1/2 minutes on the album, three of which are between the 6-7 minute mark, there is a lot going on riff wise on every track which I think is another stand out merit for this album.

I have a feeling Cerebral Rot are going to be on the top of many AOTY lists, “Odious Descent Into Decay” is a solid debut album that shows OSDM can still be served up with fresh cuts, even if those cuts are putrid and rotting. (Ted Gloom)