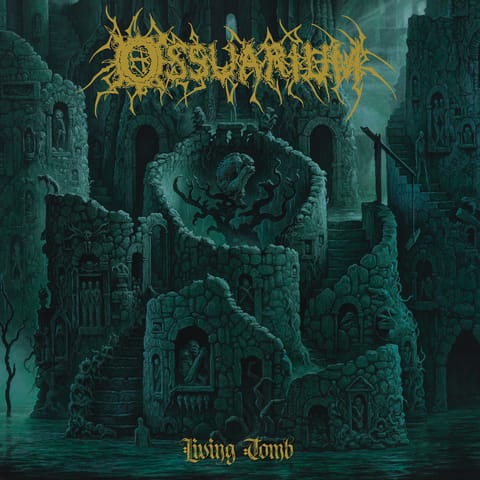 Finally after 2 long years, a demo and a split later we get a full length from new death/doom TITANS, Ossuarium! Their demo, “Calcified Trophies of Violence” is still to this day in my regular rotation so I was chomping at the bits when I seen this in our promo list. Low and fucking behold, THIS RIPS HARDER THAN A PITBULL LATCHED ON TO A PAIR OF NUTS.

After the intro song you get a strong smell in the room. Probably the, “Blaze of Bodies” that just dropped on you. An osdm sound that you almost forget you’re listening to a doom band until the last riff completely levels you and then back into a blast beat to just top it all off. Moving on and the stench gets even stronger because of, “Vomiting Black Death” which is exactly what this song sounds like. Starting off with more of the doom elements you’ll want to turn off a light and give this one a go. A sick phaser on the guitar turns this into a nightmare through and through.

I could literally go on and on about this album but i’ll keep this short and sweet. 20 Buck Spin released it, Ossuarium fucking killed it. Plan on seeing this on a TON of end of the year lists by the time it’s all said and done. (JonG)