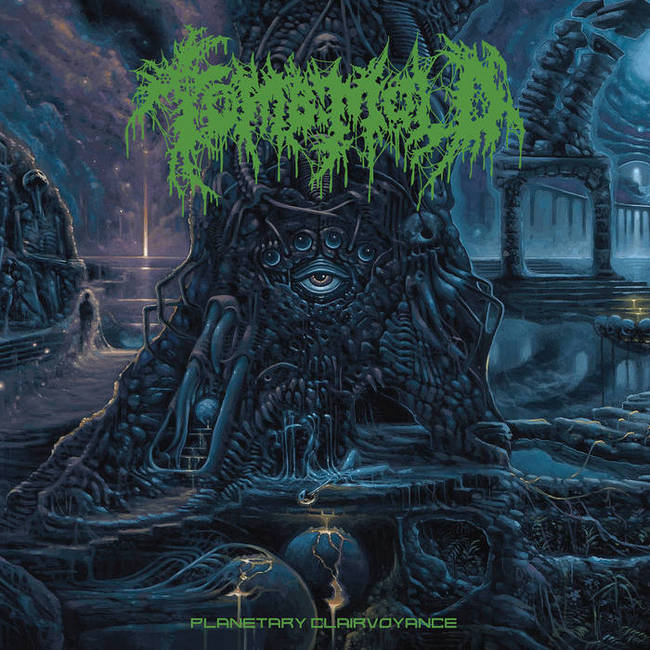 Eagerly awaiting the release of “Planetary Clairvoyance”, the old connoisseur chose to again revel in the auditory consumption of Tomb Mold’s previous material.  Striding to the shelf in order to retrieve the records, he caught his reflection in the mirror. Simultaneously, his consciousness was invaded by a gurgling, aquatic and alien voice.  Piercingly it commanded, “Claim your birthright. Transcendence requires a sacrifice.”

Familiar music and vivid imagery flashed into his consciousness, previously implanted into his gray matter by Tomb Mold.  He saw himself tearing into the bleeding earth; Clear liquid primordial malignity seeping into his body. Expanding limbs, breaking bones, flesh becoming oak as he became rooted to the ground…impenetrable…immobile.  He felt tremendous pressure within his body and soul-crushing anxiety as the waves of images relentlessly continued.

A blood moon luminesced overhead among darkened gray skies;  A swirling, abyssal portal of boundless darkness glittered with gold silhouettes of soaring monoliths.  The dying sucked through while winged abnormalities passed overhead. He could feel the affliction coursing through his body as if his veins were filled with searing flames.

He recognized the imagery and of course knew the music that was inexplicably playing in his consciousness.  He had worshipped Tomb Mold as a deity. Inculcated by “Manor of Infinite Forms”, “Primordial Malignity”, “Cryptic Transmissions”, “The Moulting” and “The Bottomless Perdition” before. The more primitive and cavernous production on Primordial Malignity played.  Organic, noxious and with twangy, discordant riffs;  Murky and raw with memorable idiosyncrasies.

Further involuntary reflections on prior offerings showed the barren Earth, reduced to a cemetary of ash.  He saw a gargantuan foundation of bones, cemented by blood; a colossus designed to bring fear to distant planets.  He witnessed the burial of a Saint, devoured by crows. Spectral remnants of past exposure to Tomb Mold’s beguiling formulations.

Impulsively turning to the mirror, he beheld spidery fractures advancing throughout the reflective portal.  Again, the otherworldly voice called… “transcendence requires a sacrifice.” The edges of the splintered mirror began filling with blood as the instantly recognizable sounds of “Manor of Infinite Forms” played in his head.  The bilious love note to old-school Finnish Death Metal jarred his consciousness.  Atypical melodic forms with twisting, off-kilter and serpentine riffs spun with cleaner production than previously seen on “Primordial Malignity”;  A depiction of the enhanced song structures and technicality within.

As he stared into the mirror, a terrifying apparition materialized.  The crawling arthropod-like form stood over 10 feet long. The giant myriapoda possessed a monstrous, metameric, segmental worm-like body with humanoid arms and head.  Its fungal infiltrated exoskeleton covered even the many crawling spiked appendages digging into the earth for transport. Long sinuous arms with elongated fingers were adorned with blackened razor claws.  Between the venomous mandibles on the lower half of its eyeless face was coiling with what appeared to be a nest of piercing tentacles. Each 3 feet long and possessed with 1 black eye surrounded by needle-like barbs;  They snaked in directions suggesting sentient control.

As the cryptic harbinger’s essence suffused into him and initiated the mutation towards his likeness, the mirror turned into a portal formed by blood;  Hemorrhaging and then shattering. He saw himself reach towards the swirling, endless tunnel and his flesh was wracked with pain as he visualized his skin dissolving and his body ravaged.  Grotesque guitar sounds and bone encrusted percussion filled his mind. His eviscerated spectre traversed the abyss among the shambling abominations; He devoured them for their remaining strength.  Assuming the throne of preeminance, claiming his birthright. Interdimensional torture…Transcending.

He stared back at the portal where the mirror had been.  The abomination was now upon him, The vile creature attached myriad hooked tendrils around his face and penetrated deep into his skull.  Trillions of synapses fired at once with relentless excruciation. It telepathically imparted the coming cryptic transmission…of Planetary Clairvoyance.

“Do you actually believe that the inferior surface race of Earth had stumbled upon such creative brilliance?  The alien melodies, oblique and jarring rhythms, subterranean frequencies akin to the crushing violence of the Earth’s crust grinding tectonic plates?”  The many serpentine appendages crept deeper into his brain. “No! It was given. Not of beneficence, but of pragmatism.”

The being raised his slender, clawed hand and grabbed the metamorphosing human’s face.  “You will become one with us.” He was consumed with pain as the appendages initiated their foul task.

“Finland’s greatest of old…Adramelech, Abhorrence, Purtenance, Demigod, Depravity, Convulse…you know these bands.  They belong to us! They are us! The Sacred Ootheca. born to usher in the age of universal torment!” The telepathic communication was nearly as unbearable as the pressure inside his skull.  “They are all under our control and part of a plan to enslave all under the sun. Demilich was the purest form of us infiltrating your world. Slowly converting humans to revere our hymns until enough were under our control to execute the stratagem.”  It started to make sense in between pangs of nauseating pain. “It began through the portal in Finland and our reach spread. Asleep…simmering over the past 30 years. And now…it has reawakened and reached the pinnacle.”

Telepathic communication ceased long enough to allow the creature’s gurgling, aqueous hiss to penetrate the man’s tympanic membranes with scalding intensity.  “We’ve no God. We are the supreme beings in this universe. What you will not give, we will take. And what you will not do…we will compel you to do. It will end with the uprising of our race and finally the enslavement of all others.”

Amidst the pain he fell into a deep, meditative and almost trancelike state.  His entire being consumed with the aural bounty unleashed by the new auditory input from Tomb Mold.  Within their most recent contribution, “Planetary Clairvoyance”, resided the culmination of years of artisanship.  With measured genius the tracks poured over him.

It was Tomb Mold without question.  Nothing had changed, only the craft perfected beyond expectation and brought to the Zenith.  Completing that which was started in Finland nearly 30 decades ago. Expansive, boundless production with stunning clarity immersed him.  “Planetary Clairvoyance” was commanding and magisterial.  Songs existed as individually complete structures.  But, in its entirety, a complete monolithic entity.

He basked in the acoustic interlude transitioning to Tomb Mold’s signature riffs, layered with controlled tapping licks.  It made the extended opening track, “Beg for Life”, one of the most exceptional introductions to an album he had ever heard.  The transition into the bludgeoning and relentless “Planetary Clairvoyance: They Grow Inside Pt 2”, was seamless.

“Accelerated Phenomenae” and “Cerulean Salvation” continued the theme of the overall weighty and unpredictable compositional structure, envisaged to be angular and jarring, but with incredible aural density.  The final track “Heat Death” brought a fitting, defervescing pacing as the instrumental track progressively decelerated through unanticipated Death-Doom territory as if one were experiencing the brilliant audible equivalent of the gradual freezing of the known universe.

He looked at the mirror one final time.  Nothing had prepared him for the final evolution.  The creature’s horrible appendages had invaded his entire body and mutated him.  His form had been distorted beyond recognition. Repulsed, he collapsed into unconsciousness.

He awoke in darkness.  Impelled by the search for air he broke through the monstrous egg-like mass containing him.  Biting, subterranean air filled his now gasping thoracic cavity. Gulping in lungfuls of stale, putrescent air as he awoke in an utterly alien environment…overtaken…unmercifully transfigured.  One of the sacred Ootheca. He was compelled by one instinct. “Find the surface…..and devour.”………..(Chris Topher MC)