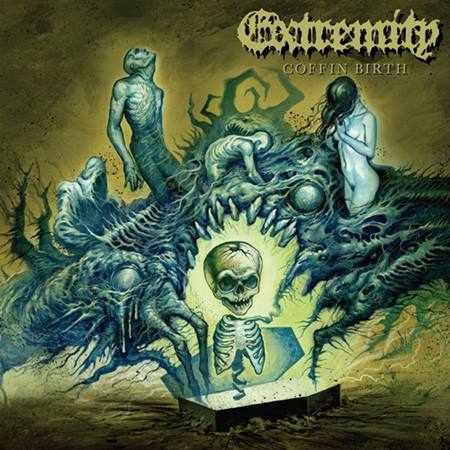 After the EP “Extremely Fucking Dead”, Extremity from California, USA, started writing for their debut full-length and it seems they were full of inspiration as not long after the EP, “Coffin Birth” was announced. The Death Metal played by scene-veterans Aesop Dekker (ex-Agalloch), Marissa Martinez-Hoadley (Cretin, ex-Exhumed and ex-Repulsion) and Shelby Lermo (Ulthar & Vastum) are as straightforward and in your face as it can be. Most of the time you will hear mid-tempo pounding Death Metal with an occasional pace-change to keep variation in the songs.

If there should be slogan for this album it should be “It’s all about the riffs”, as it is just as easy as that to describe this album. Pounding, Old School and crushing riffs accompanied with galloping drums in the vein of Autopsy, old Death, Necrot and while having the straightforwardness of Bolt Thrower in mind. It is quite possible this album is already their swansong…and if so, they leave the battlefield victorious. (Ricardo)