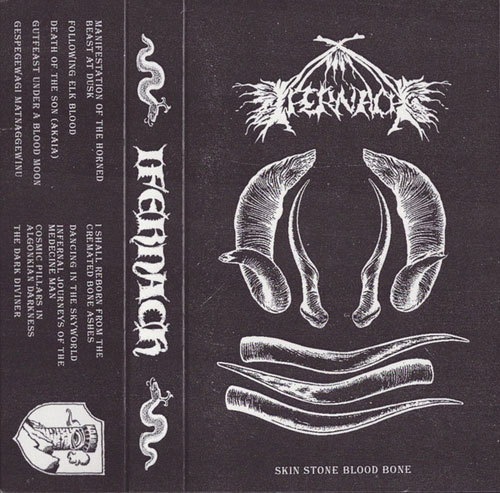 Canadian / Gaspesian Ifernach from the province of Quebec are a band centered around Finian Patraic and supported live by musicians from Brume d’Automne, Néfaste, Death Brigade, Mort aux Gueux, …

Ifernach manifested itself in 2016 and since then, the band has released no less than 3 EP’s, a split and 3 full lenghts : “Maqtewek Nakuset” (2016), “Gaqtaqaiaq” (2018).  Musically it is a rather original and savage mixture of raw Black Metal with the necessary epic parts, some tribal and atmospheric passages and other feral and punkish ingredients.

“Skin Stone Blood Bone” is the third opus, still strongly clinging on to the native theme of the Mi’kmaq. The Mi’kmaq are indigenous Indian tribes that do not belong to the Inuit or the Métis. They are also referred to as ‘The First Nation’. Pictures show Finian sporting a mohawk haircut and Indian warpaint.

A couple of tracks are titled as: “Death of the Son (Akaia)”, “Gespegewagi Matnaggewinu”, “Infernal Journeys of the Medecine Man” and “Cosmic Pillars in Algonkian Darkness”, just to to give you an idea of the titles and the native Indian ideology behind the songs. Drum patterns on most of the songs are the equivalent of brutal Indian war drums, guitars do have a punkish edge, vocals are nefarious, savage and raw. Apparently sung in French and English, even Mi’kmaq. Keyboards / synths provide a creepy atmosphere here and there – as is often the case in underground Black Metal these days.

Nonetheless there’s variation aplenty in the songs , from savage and fast tribalistic Black Metal, to slower atmospheric / ambient parts full of acoustic guitars and all the trimmings. Axe work is uncanny, barbarian and extra ordinary here, based on a simple linear motive with additional layers.

The music breathes out this early unpolished Akitsa feeling, just to cite some form of musical comparison. Production is clear but also necrotic lo-fi with muffled vocals. The thing is; this album does sound very original and extremely raunchous. It’s truly hypnotic in sound and disturbingly weird. Still it’s Black Metal and insanely genial enough to earn a spot in my personal list of favorites. The band seems to be signed to Nekrart Productions at moment, who also handle the previous releases.

Black Metal maniacs into primitive yet rather well produced savage primal noises are encouraged to check out Ifernach’s musical outputs on YouTube. With the proper promotion, Ifernach are likely to become a cult band in years to come. (LV)