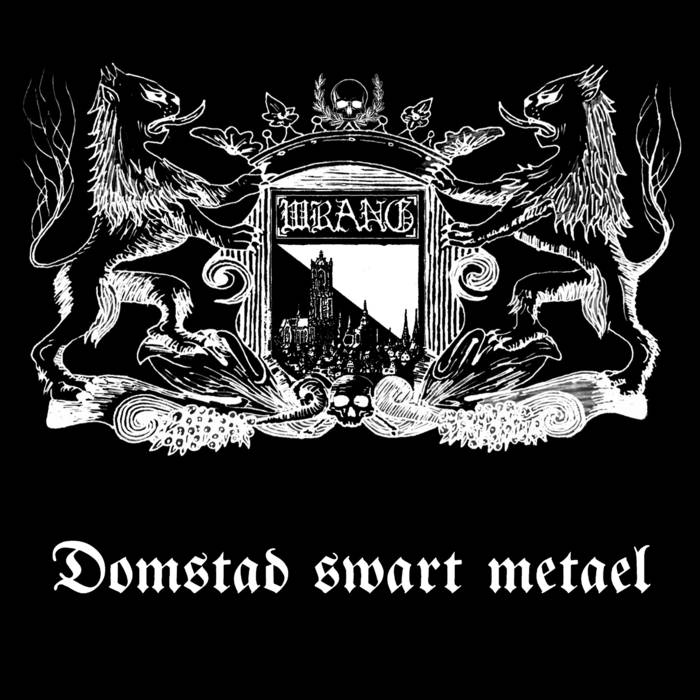 Interest can be drawn to so many things when it comes to music, and a first impression can keep your focus rooted for good. What first drew my eye when I first looked up the band Wrang was their band logo. More of a crest or emblem than a logo, its a low resolution black and white rendering of the Utrecht skyline featuring the towns most prominent feature, its cathedral. there is something about that image with the bands logo emblazoned above it that has drawn me in and kept an iron grip on my focus.

Wrang are a Dutch Black Metal trio who have been active since 2013. They started out by releasing a demo and then followed that up with a split release with an excellent band from my own country called Arrogant Destruktor. Then in 2019 they unleashed this, their debut full length opus entitled ‘Domstad Swart Metael’, which in keeping with the previously mentioned band crest translates to something like Cathedral City Metal. Featuring five tracks, this album was initially released on CD by French Canadian underground label Tour de Garde, but this year has seen the albums revival as Dominance of Darkness have seen fit to re-release it on LP. And a worthy addition to any Black Metal collectors shelves this would be…

No frilly introductory tracks or mucking about for Wrang, for they are purveyors of straight up, in your face aggression, though with a large serving of rhythm and groove thrown in for good measure. That being said, they do have a short piano interlude during the opening title track that came out of left field and yet felt very much at home. I’m particularly impressed with Wrang’s ability to never stagnate, and both their musical and vocal stylings altar, twist and turn at every available opportunity.

I’d say that the vocal range on display is not the bands strongest element, but the differing and changing range is exciting and interesting through, journeying through shouting, chanting, and pure aggressive barks and shrieks. For me though the album comes alive through the guitar leads and the pacing from the drums. Valr, the man behind the kit orders and cajoles the band around like a five star general and he sets the pace for each round of aural attacks. Galgenvot on guitar duty is a true artist, playing brutally fast riffs that can then break away and become whimsical stratosphere searching leads. Not that bassist Cathamas stands by idly, and his steady rumbling bass tones give the album a solid basis on which to build a finely crafted and savage album.

The very worst thing I encounter as a reviewer isn’t a bad album. I can talk about those ad nauseum. It’s the album that moves me to say nothing, the album that doesn’t speak to me. Wrang and ‘Domstad Swart Metael’ are the complete opposite. They are not the most proficient band I’ve ever heard. Nor have they created an hour plus masterpiece. Yet they interest me, and that interest helps me to be invested in their music and that’s why I love this album. They have also inspired me to visit Utrecht so that’s a conversation to have with the missus. In the mean time I’ll continue to enjoy their brand of enticing mix paced Black Metal that is mostly aggressive and hostile but has a more nuanced and introspective side. (Marksson)