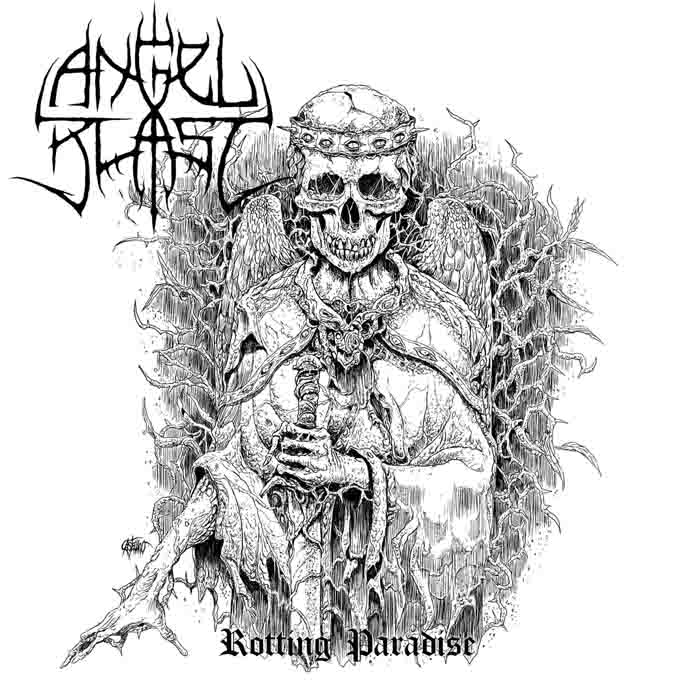 International co-operations are often interesting and nowadays easier to accomplish compared to the past thanks to home recording-equipment…at least in terms of songwriting and recording. A Canadian and a Swedish man decided to join forces to found the Black/Death beast called AngelBlast. Hempy Brynolfsson and Gord Olson taking care of the guitars and vocals…I don`t have the information about the other instruments.

Their first output is the now discussed EP “Rotting Paradise”. The production is clear and warm at the same time. Nothing was made too much. The 3 tracks combine the atmosphere of melodic 90s Black Metal with thrashy Death Metal, Morbid Angel meets Dissection somehow. The tracks are pushing forward, flowing, changing, moving, bewaring the groove and still crushing at the same time.

Variation is the key here and works very good. Nice guitarleads with a melodic edge and cool whammy bar skills I really appreciate. Great musicianship here, you can truly hear that those guys know their stuff. I also dig the vocals which have a cool tone and variation as well.

Nice, short release that reminds of the aforementioned bands as well as Deathchain and sounds very promising to me. Go and check this out. (DPF)