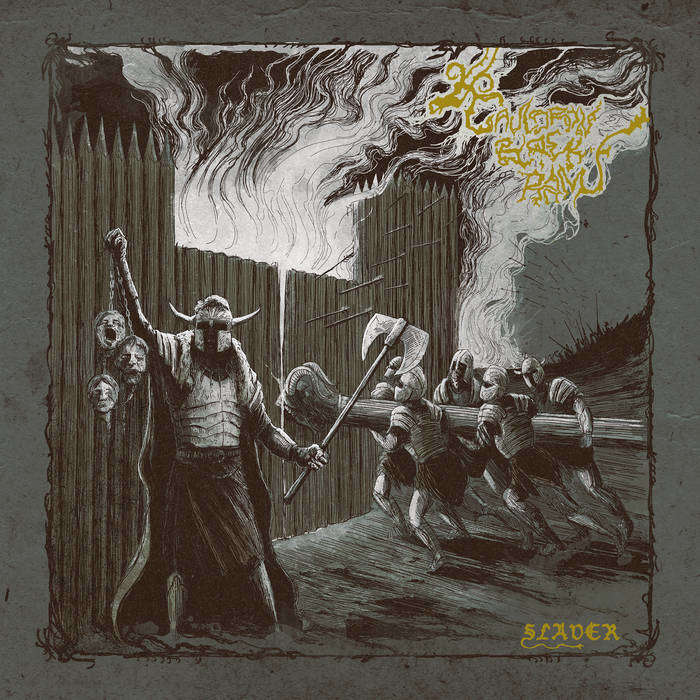 Australia and its evil forces, ready to strike deadly, twisted minds from hell unleashed, the south of heaven…

Cualdron Black Ram from Adelaide belong to the long running acts and should be well known in the underground. Their Black/Death has its own characteristics, being morbid, doomy to one side, somewhere between Autopsy and Morbid Angel or fast chaotic like Archgoat meets Necrophagia (sounds weird huh?). In the 24 years of their career Cauldron Black Ram released 3 full lengths in total, “Slaver” being the 4th one and let me tell you, a monster of an album.

Imagine Autopsy, Demilich, Incantation and Archgoat writing an album together, yeah! It’s down tuned twisted ugly mind corrupting and just unique. “Stones Break Bones” is probably one of the darkest tunes of the year and could have been on an Imprecation record as well (Eerie keyboards included).  “Grave Awaiting Corpses” feels like If the dead are calling the listener to join them. The bass solo is amongst the best in 2020. Demilich salutes you. If you think instrumentals are sometimes just fillers, boring ambient tracks of show off for the instrumentalists then be prepared for a marching heaviness in “ His Appearance “.

Cauldron Black Ram know how to write songs that are versatile, groovy and catchy and doesn’t need constant blasting or stuff like that, “Whore to War” being a prime example, what a track! When a band can pull off so many killer riffs without sounding like copycats they did something right. Anyone knows Stargazer? Cauldron Black Ram are probably the caveman twin (“ Temple to Death ”).

It’s cool to see how cool they use different rhythms and time signatures to give the songs a certain complexity without losing the mind completely and going for ultra prog tech wankery. The production is filled with some reverb but very natural sounding and atmosphere fitting. Reminds of Coffins or Cianide who got similar productions (or Demilich ha).

I liked their previous record “Stalagmire” very well and “Slaver“ won’t change my love for the band. Probably their best record so far and one of my faves in 2020. Decide for yourself. Killer! (DPF)