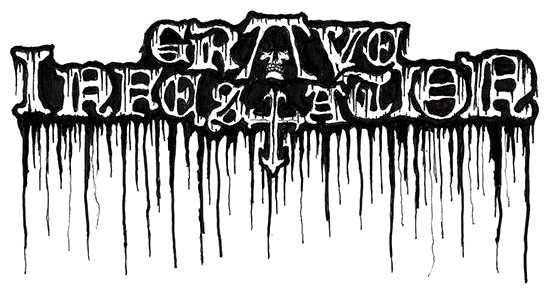 Rotten, putrid, decay smelling Death Metal. Something to get excited about…Grave Infestation from Canada released 2 Death Metal demos in the vein of Old School Death Metal in the vein of Autopsy, the old Swedish Death Metal scene and Repulsion. Reasons enough to knock at the door of those friendly Canadians and talk about the band, inspiration and so forth…(Ricardo)

GC (vocals/guitar/samples), TS (bass), and AS (drums) have played in a bunch of bands together for years and while on a tour with a different band we all played in, we all decided to start a band that blatantly worshipped death metal, specifically the disgusting and primitive stuff we were all big fans of, and also to ensure there was a nod to the Finnish and Swedish masters. We actually had the songs written, and possibly even recorded, before we finalized the band name. We had a few options for band names but we were taking a long time to choose one. We were all going to a party and decided that we would choose one by the end of the party, and we almost had to settle with one that was alright but still not 100% what we wanted when GC suddenly turned to us as we were leaving the party and said, ok I’ve got it – and he had come up with Grave Infestation. When we decided to release “Infesticide”, we discussed adding a 2nd guitar player, and our good friend BC agreed to join. He was a close friend but also one of the best guitar players in the city, and he loves death metal. It was an easy decision to add him. BC played on the “Infestation of Rotting Death” demo.

We all love this style of death metal, GC grew up with it and heard OBITUARY’s Slowly We Rot when it first came out on the radio when he was younger, so he clearly grew up with bands like CANNIBAL CORPSE, ENTOMBED, DEICIDE, OBITUARY, DEATH, AUTOPSY etc.., AS started listening to bands in this genre in later high school years and mostly wanted to bring the spirit of what bands like ABHORRENCE/NIHILIST contributed while wanting to incorporate more of the technical/production aspects of bands like DEAD CONGREGATION, and TS is a few years younger than us but definitely has a passion for the genre, and he manages to stay up to date with newer bands too.

The parts of the genre that really appeal to us is the disgusting, raw, primitive aspects while not posturing to be something more than it is. It is a sincere genre with the current very active international community being made up of some of the most dedicated and authentic people we know. It might not be easy to hear because of the genre differences, but bands like BLASPHEMY, MYSTIFIER, SARCAFAGO, USURPER, UNLEASHED, etc.. are also big influences on the band, specifically the soul and spirit of those bands.. obviously there are so many others we haven’t listed here.

Thanks for the introduction of Grave Infestation, let’s talk about your first demo “Infesticide”…still satisfied with it?
Interesting question because after we recorded it in June, it took us about 6 months to finally release it.. we recorded the demo just to get it recorded on a weekend, and there was no pressure to record something and release it, so it was done in a very sincere way with no expectations.. after recording, it took 6 months for us to confirm that this was definitely worth putting out before we actually released it – when we did pull it up in early December and listened to it again – we realized we had recorded something awesome. We recorded it on small island at our friend Jordan’s studio which is a ship builder’s workshop turned into a recording studio. The island is fairly remote so we slept in a cabin during the recording and had the chance to really dig deep into the recording and fully put our energy into it. The artwork was done by GC, it was an accidental coincidence that all of our art, logo, layout is done by band members… so GC did the art and logo, TS does the layouts, and AS has recently completed the cover for the 12” release which will include both demos. In addition to the band doing its own art, GC also created all of the samples for both demos.

And shifting towards your latest demo: ““Infestation of Rotting Death”.
As the band continued to write, we decided to release another demo because we had material and a tour coming up, but also to solidify that we were no longer a 3 piece, but rather a 4 piece with the addition of BC. We wanted to quickly establish his role as a permanent and core member of the band, so “Infestation of Rotting Death” saw BC start to contribute to the tracks by his writing of his solos. We recorded this one in our rehearsal studio with our friend Braden DeCorby who has recorded many of our other bands (ENCOFFINATE, CEREMONIAL BLOODBATH, TEMPLE OF ABANDONMENT, STARVATION etc..). It was largely done with us all in the same room and then solo and vocal overdubs, so very minimal setup but it suited the music well. GC did the art for this release as well, and we only released this demo as a limited 150 copies tour edition, it sold quickly but we also knew that Invictus was going to release a 12” with both demos soon.

Both demos were released on cassettes…
Invictus is releasing the two demos on a 12” record, but cassettes are important because they are accessible and a deep part of the tape trading history of the genre. We are all big fans of cassettes and we all collect cassettes, so the format makes sense to us. Invictus will also be releasing a CD version. 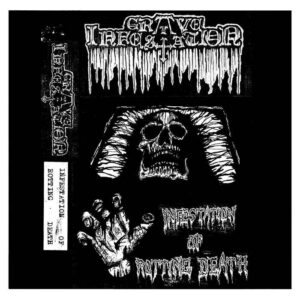 Ah, you mentioned Invictus Productions, the well respected label from Ireland. How did you get in contact?
We contacted Invictus and they were interested to work with us. They will release the 2 demos on vinyl and CD, but we are also working on a new full-length record that they will be releasing.

The lyrics, can you tell us more about the inspiration?
The lyrics are all written by GC and we are all big fans of his lyric writing style.. there seems to be a recurring theme telling the story about a demented axe murderer, and death of course. The lyrics have themes and concepts, but I think most importantly, the lyrics are meant to be interpreted by the reader too. The 12” vinyl includes all of the lyrics. The lyrics and vocals are definitely an important part of the band, and GC usually brings vocal ideas in early during the song writing process.

What will the future bring for Grave Infestation and your other musical activities?
We expect to do some touring in 2020 and to write and record a full-length record, ideally to tour with. We are currently booked for a couple fests and gigs.

We have written new songs, and most of all they differ mostly by how our writing process and style as a band has become a much clearer process, and the solos now with BC and GC both doing back and forth solos are getting even crazier which is awesome. Most of all, I think what people can expect in future material is just stronger song writing and more pre-meditated soloing, as well as even stronger vocals and lyrics. Infesticide was originally recorded without the intention to even worry about releasing it, so there was not as much preparation for the recording session as we are putting into preparing for the full length. That said, expect a couple songs from the demo on the full length studio album.

We all play in several other bands, GC plays guitar and co-writes in CEREMONIAL BLOODBATH, ENCOFFINATE, and AS plays in STARVATION (bass), TEMPLE OF ABANDONMENT (drums), CEREMONIAL BLOODBATH (drums) and ENCOFFINATE (guitar), TS also plays and writes for STARVATION, and BC also plays in band called RITUAL DICTATES. All of these bands are active so there records/tours/gigs coming up for all of them. 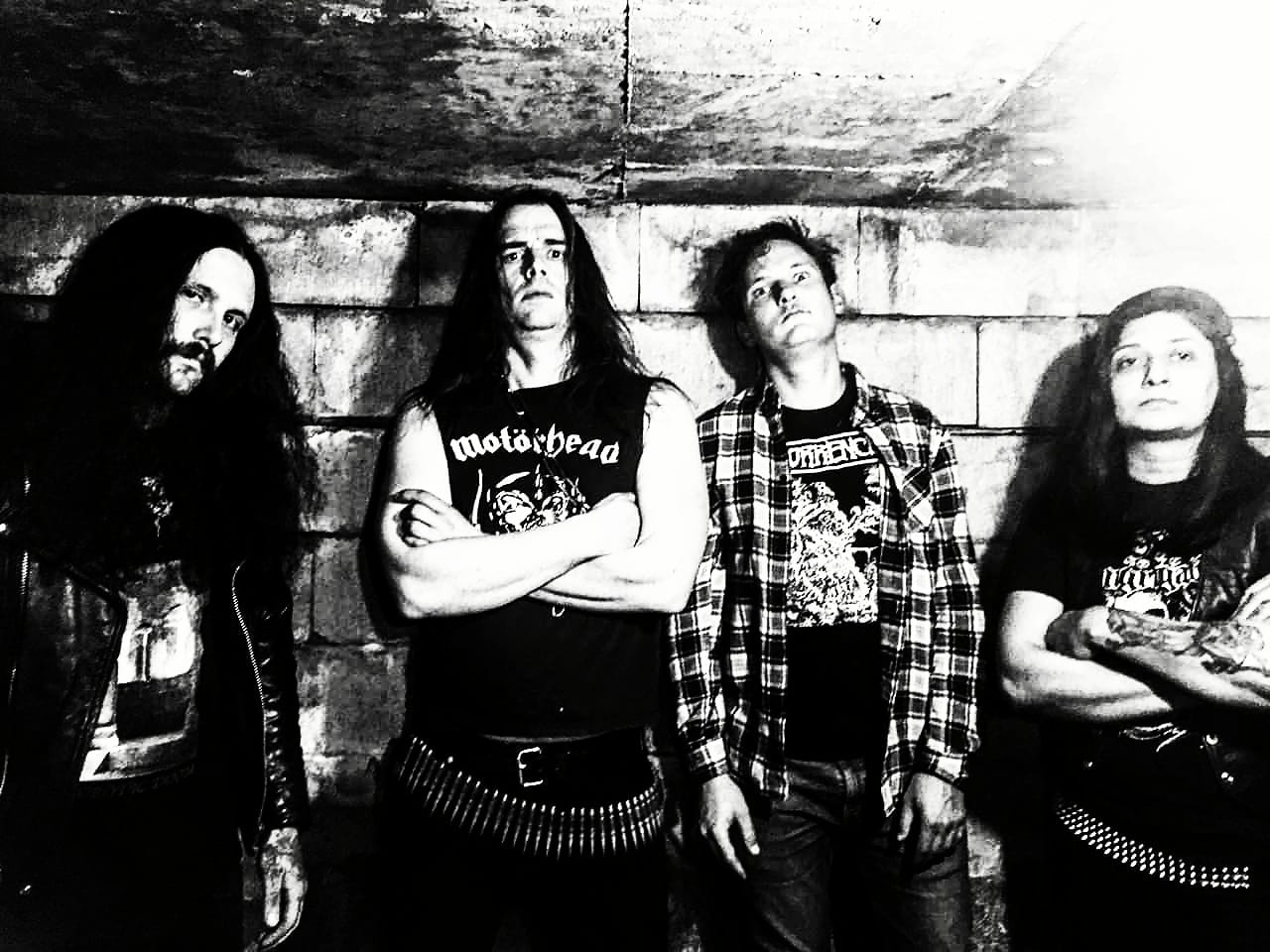 How about your local scene? Any good?
Underground/extreme metal in our region is fucking great, some obvious but noteable bands include BLASPHEMY, REVENGE who are both from Western Canada and are clearly a critical part of what is happening in this area, and we are closely aligned with bands such as HOOPSNAKE, MITOCHONDRION, NECROHOLOCAUST, ALTERED DEAD, NIGHTFUCKER, AUROCH, RADIOACTIVE VOMIT, REVERSED, HUMAN AGONY, REGRESS, DEATHWINDS, and probably many more that we are missing. It’s almost impossible for us to create a proper and full list of what is happening here, it’s pretty impressive. As for overlooked bands, I mean – most of the bands from our city are most probably overlooked… other than Blasphemy and Revenge of course.

Thanks for your time!
Thanks for keeping up with interviewing bands and running a zine.