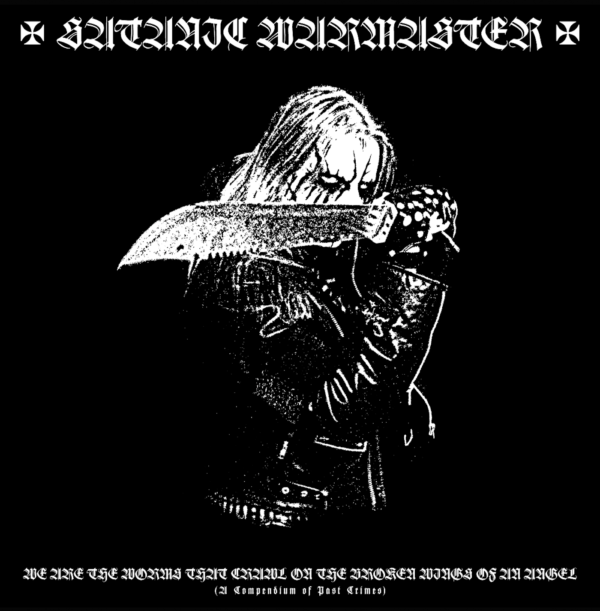 Satanic Warmaster, easily one of the most well known, respected and feared black metal bands to come out of the cold, Nordic Finland. Since 1998 the mighty Werwolf has pumped out and impressive 5 full length albums, 13 splits, 6 live albums and numerous EPs, compilations, demos. A great mass of music. In 2017 another compilation has been brought forth to defile the earth with an as lengthy title as mighty music. Not to be confused with the in 2010 released compilation with the similar name W.A.T.W.T.C.O.T.B.W.O.A.A. Some songs featured on this 2010 release are found again on the 2017 release, for example ‘Hold On To Your Dreams’, ‘The Chant of the Barbarian Wolves’ and ‘Dead Light of a Lost Star’. Other songs on the 2017 come from numerous other releases, for example ‘Six Million Tears’ from the 2004 Akista/Satanic Warmaster split and ‘Where Eternity Awaits’ from the 2008 Behexen/Satanic Warmaster split. Once again this compilation is filled to the brim with harder to find and great releases. Once again Werwolf brings us his coldest and most hateful screams with icy riffs and pounding drums. No remorse is offered on this album and it is definitely a hard listen if you are not used to this cold, bleak and aggressive cloth of black metal. But ofcourse if you are, this compilation will be one of the best things you can spin on your turntable and blast through your speakers. Personal favourites include: ‘Hold on to Your Dreams’, ‘Six Million Tears’, ‘Massacre’ and ‘Where Eternity Awaits’. But really there are no bad releases on this record. Hugely recommended for fans of cold, aggressive black metal and a must have for fans of Werwolf. (Svart)