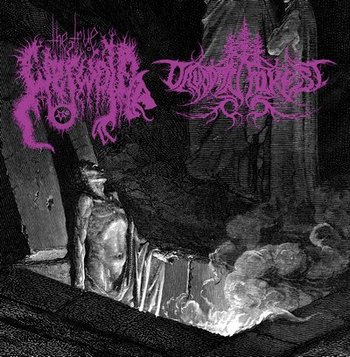 The True Werwolf and Druadan Forest, both acts who combine their (raw) Black Metal with Ambient soundscapes throughout their lengthy discography. With either a song with a duration above 20 minutes I hoped it wouldn’t be an 100% Ambient release. Unfortunately for me, this is a synth-driven album, or as stated “epic-length compositions evoke cobwebbed castles and misty moors, wandering spirits floating between both under a moonlit sky”.

Nowadays the genre “Dungeon Synth” would be used to describe this split but both acts aren’t identifying themselves with it, as it was not their intention because they were creating such tunes before the term exist. Once again a release that is not for everyone, but if you enjoy a good Ambient track, you can give “Frozen Throne of the Final Winter of Endless Sorrow (The Funeral of All Life)” or “Ravenwinds on My Path Towards the Entrance into the Cold and Lonely Mountain” a try. (Ricardo)