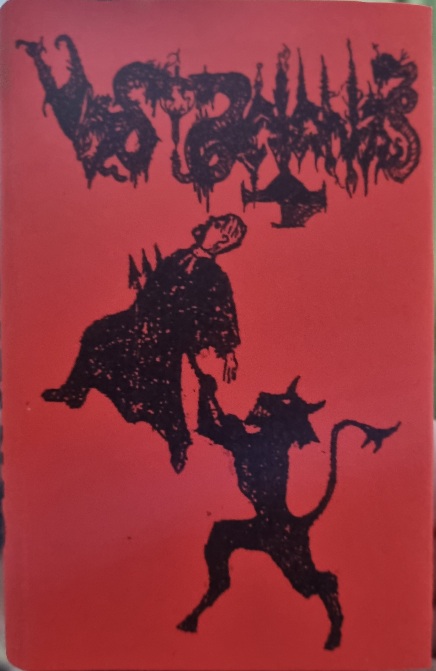 Vas Satanas is a Finnish band consisting of Exxxiler (Morgal and Bergilmir) on drums and Vorr (Daemonlust, Nefarious Rites, Nocturnal Sorcery and Persekution) on vocals and guitars. Their self-titled demo was released on cassette in 2022 by Werewolf Records.

The material on ‘Vas Satanas’ consists of six tracks recorded in what appears two different sessions based on the production quality. Not that any of it sounds polished, but the last two tracks are certainly as rough, muffled and unpolished as can get. These recordings also sound a little bit less developed, suggesting they may be earlier tracks of the band. What we find here is a band that is more directly influenced by Finnish Black Metal like Archgoat, with hoarse, almost grunt-like vocals. This is particularly the case for the fifth track, ‘Infernal Black Race of Death from Hell’. On the sixth track we find the band in a more furious blasting mode, blending Black and Death Metal not unlike for instance Sadomator, although the production makes it hard to discern a whole lot of the riffs. These tracks do form a good reference for the first four songs, which are more accessible in sound although altogether still very gritty recordings. On these tracks, the band has blended Black and Death Metal into highly volatile mixture that often alternates between furious blasting sections and more mid paced evil. Once again, something like Archgoat, Blasphemy and Sadomator comes to mind. Draped over this are vocals that stylistically remind me of Lord Satanachia of Azazel, a combination of spewing lyrics interspersed with ughs, howls and growls. It fits just perfectly with their not so very subtle musical style.

No music for the faint of heart, but my guess is that you wouldn’t have ended up at this review in the first place if you consider yourself in that category. If you’re into Black Metal that borders Death Metal, that’s raw, gritty, and at times chaotic then this Vas Satanas demo is certainly worth a listen.