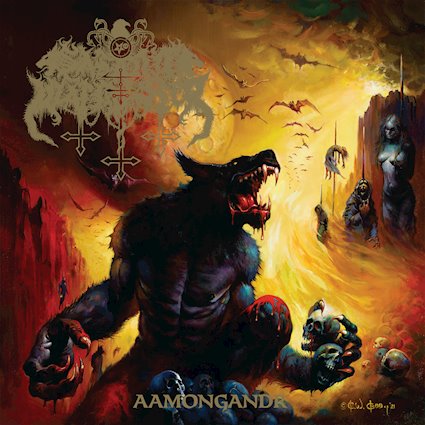 Is there a more anticipated album release within the Black Metal realm than the new Satanic Warmaster opus? Nearly nine long years since 2014’s ‘Fimbulwinter’ and finally the interminable waiting is at an end. ‘Aamongandr’ will be released on the 30th December on CD and cassette whilst an LP version will see the light of day in early 2023.

Six tracks and no build up, ‘Aamongandr’ gets underway with a blistering sense of urgency and throws itself straight into an array of blast beating frenzy and a wild abandon of onrushing guitar leads and riffs so cold they could have swept down from the Arctic Circle. Opener ‘Bafomet’ is a surging maelstrom of fast paced ravenous Black Metal with the signature Satanic Warmaster rasping vocal style, and moves forward with unrepentant drumming ferocity and guitar leads laced with ice and steel. It’s more of the same from ‘Duke’s Ride (Ride of the Spectral Hooves)’ whose lyrical theme sees the album roam a blood soaked battlefields and whose musical accompaniment introduced for the first time on this offering the trademark intensive grinding melodies that make Satanic Warmaster so memorable. As well as that there is some haunting astral interludes that break up the tracks savage onslaught perfectly.

One of my personal favourite tracks from this album has to be the simple Punk style riffs of ‘Berserk Death’ which then lead effortlessly into darkened soaring atmospheric wanderings created through the subtle use of synth. This track really showcases the duelling sides of Satanic Warmaster, the raging black heart and the beautiful rising harmonies in complete contrast to each other and yet complimenting one another so well.

It’s back to unfettered rampaging brutality for the unrelenting ‘The Eye of Satan’, though there is still a great deal of hungry, urgent bleak melody hidden within the punishing drum tones and the constant sonic rumble of bass. That said, there is always room for a little dark Ambient within the undertones and the astral tones are back once more to add a little shine and gloss to the carnage. Its tracks such as this that really feel like there is a war going on, a conflict if between the powers of unbridled raw power, and clear, crystalline and pure melody. neither side is winning and during the ensuing stalemate, magical and mystical forces are blending with barbaric sounds to create this mesmerising album.

If you haven’t already guessed, I rather like this album, and it will only get better with repeated listens. Nine years is a long time to keep us waiting Werwolf, but damnit, it’s been worth it!