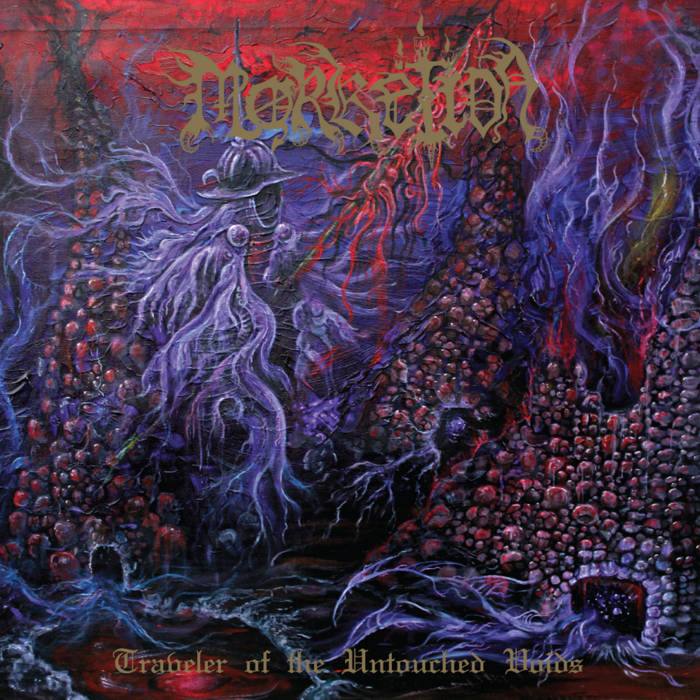 Mørketida from Finland deliver their second opus after their 2018 “Panphage Mysticism” debut with this 4-track EP. Musically, there’s progression to be found in their sound: a brooding type of raw, yet epic 1990-s Black Metal music with keyboards.

The primitive hypnotic tremolo picking on the strings and relentless blasting on hollow drums have remained. What has been added is an even more murkier sound, dark droning doom-laden guitar chords, genuine symphonic keyboard bursts and deep menacing vocals. Mørketida also don’t forget the melodic aspect – as can be heard by the use of an acoustic Spanish guitar on the third track, “Traveler of the Untouched Voids.”

Beside all this, Mørketida still rely on the epic and icy atmosphere that can be found at their Norwegian colleagues. Without being a copycat, that is – just listen to the amazing waves of crashing guitars, alternating in speed and sludgy string technique on the second track “Upon the Aged Heavens”.

Final track is a worthy cover of Immortal’s “Unsilent Storms in the North Abyss” which shows their affinity to the Norwegian sound of old.

The material on this EP is certainly a couple of notches heavier than on the debut. Heavier, but also way more detailed and profound, allowing all instruments, including the symphonic keyboard fragments to take their seat in the mix of this EP. I find their efforts of blending traditional 1990-s Black Metal with more modern influences and a-typical twists quite refreshing.

Those who enjoyed the debut are in for a treat. Those who haven’t heard any from Mørketida yet – are advised to check out their material. (LCF)