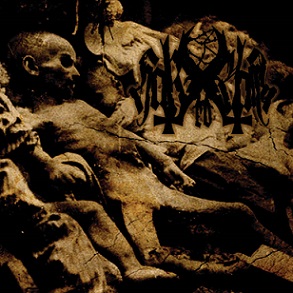 Look at the cover, read the title, press play and you get what you expected. Or maybe not? Well…yes, Black Metal with full power, blasting all the way into your ears or brain. Some may scream NSBM already, but regarding to the label and what I saw I don`t think so. Well, back to music. This is almost pure Marduk as it is northern fury with heavy artillery, going for speed and killing as fast as possible. From time to time the panzer is rolling and gives breath to the bones, before changing into machinegun power once again. The production fits the music well as it is powerful yet balanced. They even included some acoustic guitar track in the middle of the album, with the perfect title and tone the monstrosities that took place there. Afterwards the tremolo picking and punkdriven riffs reign once again. Some Nordic melodies may find their way to in all this chaos giving it an extra note of melancholy and making the other parts more brutal which concludes that Hak-ed Damm knows what they want to do. Sure it`s nothing new but it is well executed and Black metalists should check this out. (DPF)

Well, well…well. Isn’t this a treat for those non-researching online keyboard fighters. Hak-Ed Damm from Canada and their label find it necessary to add a digital flyer that they are not a NSBM band…only because they have made a concept album about WWII and have chosen a historical fact as album title; the mass bombing by the Allies on the city of Dresden which killed between 22.000 and 25.000 citizens. If that is going to be the trend, a lot of bands can follow this statement, cause the abominable acts during WWII has been covered more than once within Extreme Metal. And this one will not be the last album. I just hope it will not be necessary…Besides the lyrics about all kind of horrific facts during the War, they create a sinister ambiance due all kind of soundscapes, being an (re-enacted?) English radio contact which involved a crew member on a bomber aircraft (a Bombardier) , salvoes of an MG42 machine-gun or the sound of a train, used as transport towards an concentration/extermination camp like Auschwitz II–Birkenau. Eerie? Maybe. Bad Taste? Probably for some. Debatable? Probably for some as well. Or as purpose to create a whole of sounds that reflects the concept of inhuman acts during the war? They achieved that! The Black Metal is mostly up-tempo which is heavily influenced by Marduk and has the intensity of Impaled Nazarene. Fast riffs, pounding drums and especially the bass lines are Marduk-driven, yet sometimes it has certain melodic Impaled Nazarene lines as well as an occasional punkish approach of the same Finnish maniacs. Interesting album! (Ricardo)