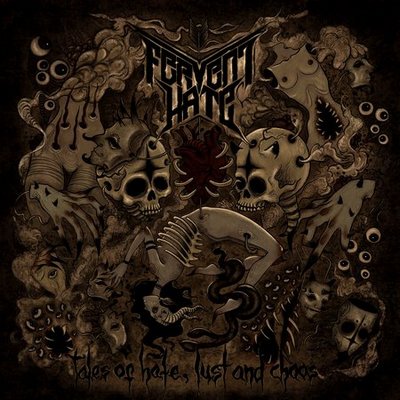 It comes as no surprise to me that this album was mixed and mastered by the legendary Dan Swano. Though the band hails from Peru, the quartet is clearly influenced by the early HM-2 masters of Sweden. “Tales of Hate, Lust and Chaos” uses the legendary old-school Death Metal sound as the basis of their sound, but remains unafraid to climb out of the glorious putridity to embed other influences. This, their sophomore release, contains an undulating wave of influences. Depending on the track in question, you may hear elements of thrash, groove, black, or traditional heavy metal mixed into the buzzsaw murk. Hell, the opening chords of “Left Iron Fist” wouldn’t seem out of place on an old Motley Crue record, until the feral filth kicks back in. It would be a mistake to think that all of this means the album is incohesive or all over the place. Fervent Hate does a stellar job of tying everything together into a cohesive whole, from filthy riff to hammering drums to vocals that seem almost hardcore influenced at times to well placed and well thought out solos. In short, Tales of Hate, Lust and Chaos plays with the mold of osdm a bit, but doesn’t seek to reinvent it. In doing so, they have created an absolute ripper of an album. (Hayduke X)