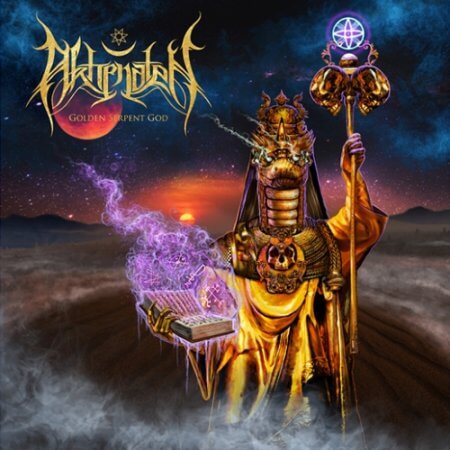 I’m sure you’ve all heard of that one Death Metal band that thematically focuses on Egyptian mythology. You know, the one that actually hails from the United States. I’m talking, of course, about…Akhenaten. The studio project of the Houseman brothers, Akhenaten has been around since 2012. “Golden Serpent God” is their third full length release in that time, and it shows them at a creative high point. Over the course of eleven tracks (and nearly 46 minutes), the duo take you on a journey of dark discovery. Musically, the album is Blackened Death Metal at its core, but the riffs, tones, and rhythms all carry that near-east mystique. There are plenty of folk flourishes and even interludes that recall ancient Egypt, but make no mistake, this music is tough! Too often folk influenced metal loses its edge. The folk elements tend to soften the genre to the point of boredom. Akhenaten are among a select few the don’t make that mistake. There is a dark viciousness to the album. Some of the interludes to carry a softer tone, but they mesmerize and mystify rather than bore. The main tracks hook you in with serious earworms, then transport you to a dark netherworld abyss where ancient evil can have its way with you. “Golden Serpent God” is one of my surprise hits this year!  (Hayduke X)